Stephen Harper's Conservative are the new Borg Collective ... "We are the Conservatives ... we are the Borg ... resistance is futile"

Those of you who are Trekies, and watched Star Trek Next Generation, and Star Trek Voyager, the following phrase can be uttered by heart:

"We are the Borg. Lower your shields and surrender your ships. We will add your biological and technological distinctiveness to our own. Your culture will adapt to service us. Resistance is futile." 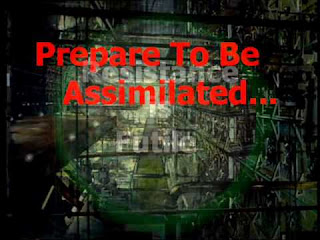 To those suffering from Harper Derangement Syndrome (HDS), and spewing all kinds of factless, and baseless, allegations over how the Conservative government is taking over every aspect of our lives (and somehow forcing a hidden agenda on everyone), this must be an apt description for them, of the Conservative Party of Canada.

In an article in the Vancouver Sun several days ago, Lorne Gunter is acknowledged in first identifying HDS. He described it as, “an ideological hatred of Prime Minister Stephen Harper that is so acute its sufferers’ ability to reason logically is impaired.”

The article went on to say:
An early example of HDS was the widespread attribution by academics and journalists of a “hidden agenda” to Harper and his party.

This has been based on allegations that:
- the Conservative government has drastically reduced funding to the CBC
- they were forcing a pro-life agenda on the country (despite Harper clearly stating time and time again this would NOT be part of any legislation brought forward
- Tony Burman wrote a story for The Star with a headline claiming Harper was a bigger threat than the Islamic State. Why? Because Harper exaggerated the terrorist threat so as to “distract voters” from climate change
- the Conservatives were going expand private health care services (this one has been floating around now (this ones been around for years, with still NO Sign of it happening, yet it has resurfaced again in recent days by THOMAS Mulcair)
- Harper has cut funding to health care, when in fact it has done nothing but increase year after year

Oh, and we can't forget that the Harper government is bound and intent on being a warmonger nation; and reasoning for that of course is for joining with numerous countries to try and halt the murderous forward assault by ISIS.  Yes that wonderful group of Boy Scouts out to free citizens in middle east countries, from their ill conceived and false religious ideas.  Yes, those folks who are simply trying to live their lives in peace.

Justin Trudeau's solutions is for everyone to join hands and sing Kumbaya (or whatever the radical Islamic version of the song is), while Mulcair simply says he will pull our Canadian Forces out of the region.

The latest alleged assault by Harper, by those suffering from HDS, is regarding the debate on the Niqab.  Despite the fact that the Niqab is indeed rooted in a culture that is anti-women, the government is in fact in no way forcing women to give up the niqab in public, ONLY in Citizenship ceremonies.

AND YET the Conservatives, and Stephen Harper, are being railed against for forcing their personal views (hidden agenda?) on women.  What an asinine statement of misinformation, and feverish frothing at the mouth, by the liberal and left-leaning elitists!

Yes ... according to them the Stephen Harper Conservatives are the new Borg Collective ... We are the Conservatives ... we are the Borg ... resistance is futile.

Well NOT apparently to the majority of Canadians ... at least on this issue.

Still ... there is NO hidden agenda ... there hasn't been one from the start ... and there is no sign of one showing up any sign soon.

In closing today, let's go back to Star Trek and one of its fans favorite characters ... Spock ... who said, "Live long and prosper", to which I will add, with of course a Conservative government led by Stephen Harper.

I'm Alan Forseth in Kamloops, and I welcome any thoughts you might have on this.