Christy Clark’s LNG Election Promise was, and is, a Premeditated, Premature, Propaganda Pipedream

The following segment, from a CBC News story this past Spring, says it best:


Clark won the 2013 provincial election in part on the promise of fostering an LNG industry that would create tens of thousands of jobs and wipe out B.C.'s debt, but the government's plan has fallen behind schedule.  (CBC May 20th, 2015)


If that segment was unique in its statement, then perhaps it could be ignored … but it isn't.  Here’s more: 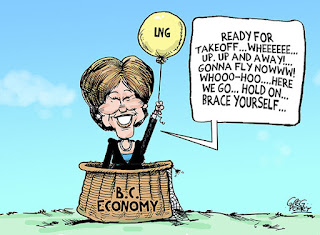 job-creating engine appears to be stuck in second gear, even as the provincial economy is predicted to surge.


Clark also rejected suggestions the government was downplaying its expectations for LNG because the throne speech did not mention past statements of creating 100,000 new jobs and eliminating the provincial debt, currently at more than $60 billion. (Canadian Press Oct 6th, 2014)


As for her legacy, she has staked a lot on the LNG industry, which she hopes will transform the province’s economy. But she could find herself in a difficult position during the 2017 election campaign if her bold LNG promises come up empty and British Columbia gets squeezed out by fierce global competition.  (Globe and Mail May 15th, 2015)


Premier Christy Clark is projecting British Columbia will rival energy giant Alberta in terms of "contribution to Canada" once the province starts exporting liquefied natural gas to Asia… "Estimates suggest that the natural gas sector could create 54,000 jobs per year between 2012 and 2035 in British Columbia." … The latest B.C. budget didn't project revenues from liquefied natural gas for the next three years.  (Canadian Press March 21st, 2014)


And from Michael Smyth in the Vancouver Province just two weeks ago:

Liquefied natural gas was supposed to be flowing like liquid gold in B.C. by now, according to Premier Christy Clark’s original get-rich timeline.  Clark predicted four years ago that the first LNG plant would be “operational by 2015,” with several more coming online in the immediate years following.


The plants would create 100,000 jobs and generate $100 billion in revenue — enough to retire the province’s entire debt and maybe even get rid of the provincial sales tax, Clark said.  But now 2015 is drawing to a close. There is not one LNG plant in operation.

And the proposed plants still on the drawing board face a series of new hurdles. (Province Nov 10th, 2015)


As well, just a couple of weeks ago, we had BC Liberal Premier Christy Clark show up with her shiny clean safety vest and hardhat to sign her name inside a giant LNG plant under construction, and to tell us how many of these tens of thousands of jobs, that she had promised, were a reality.

It was a mere handful.


Christy Clark promised British Columbians she would create a Prosperity Fund that, over three decades, would generate over $100-billion in tax revenues … that from her promised liquefied natural gas industry.


All I can say is… “Christy Clark’s LNG Election Promise was, and still is, a Premeditated, Premature, Propaganda Pipedream”


In Kamloops, I’m Alan Forseth, and I look forward to seeing your thoughts on this?