Without it, there will be no one to serve an “Eviction Notice” on Christy Clark on May 9th, 2017 – with the exception of the BC NDP

What happened in Victoria last week?

Well for those interested in politics, the end of the week was the final sitting of the legislature for this session.  It was a day where a lot of reflecting on how the Fall session had gone, what had been accomplished, what could or should have, etc … and all of the media political reporters were there to get the comments on those and other things, from BC Liberal leader Christy Clark, and NDP leader John Horgan.

In other words, the perfect opportunity to capture the media’s attention with a 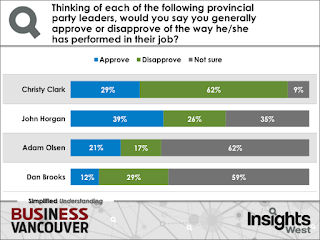 well-placed shot across the bow message.  Which party was missing from the BC Legislature to capitalize on this opportunity?  Dan Brooks and the BC Conservative Party.

I met with Dan Brooks nearly two weeks ago, in Kamloops, to talk. At that time I suggested that he throw away his 'Pablum' stump speech and start getting hard-hitting.

ASK … where are the tens of thousands of jobs that Christy Clark promised would come from LNG, and where were the promised tax dollars that would be put into a rainy day fund to help pay down debt?  ASK, why does Christy parade around at photo ops with her shiny new safety vest, and white hardhat, proudly announcing mere handful of jobs created from what she told us would be the future of BC, while the promised high paying union jobs fail to materialize.

Ask where is the initiative to create a solution, and policy, for a safe and reliable transportation system (spearheaded through a Regional BC Transit system with participation of First Nations, municipalities, and Northern Health) for the highway corridor between Prince George and Prince Rupert.

Where is the fall-out and firing for email triple deletes?

These and so many other concerns that British Columbians have.

I told him he HAD to come up with clear articulated policies that would differentiate the BC Conservative Party, from the BC Liberals, ones that would resonate not just with rural British Columbians, but also the larger centres, and the suburbs. 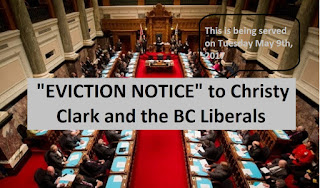 None of that matters however if you cannot get the attention of the media, which is why I also made this suggestion.  March to the steps of the BC legislature on Friday afternoon (as it was the last day of the Fall sitting for the BC Legislature) with a white board lettered EVICTION NOTICE.  Forcefully, and with conviction state that the BC Conservative Party WILL BE a force in 2017 election … and announce he (Dan Brooks) was serving an Eviction Notice on her and the BC Liberals.  That as of May 9th, 2017, their time was up.

I thought it was a good strategy at the time, and I still do.

There were three days to pull the plan together, more than enough in my opinion, however, nothing was done, and the opportunity passed by.  Passed by much like the majority of British Columbians pass by the BC Conservative Party without even giving it a second look.

Because of the over two decades I previously had in the broadcast media, and having been politically active for many years as well, I have a large number of people from one end of the province to the other, that I know in the media.  After Friday had come and passed, without so much as a whisper from the BC Conservatives, I asked one of my media contacts what they thought of the strategy I had proposed.


They said, “I think it's a great idea. Yes, it is a stunt, but they get noticed. Dan Brooks has bad advisors who think full press releases are the solution. I get them, read them, and toss them because they are just words.”

They went on to say, “Why did Trudeau get elected? He had a message, he delivered it, and he convinced many he actually believed it. He used social media, photo ops and accessibility to keep saying the same thing.”

I have to agree with what they said, because strategy, and common sense, is badly needed in the BC Conservative Party, but right now it is totally lacking. 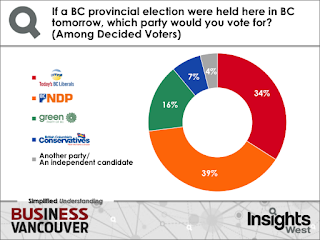 Without it, there will be no one to serve an “Eviction Notice” on Christy Clark on May 9th, 2017 – with the exception of the BC NDP.  Unlike Alberta, where the Wildrose Party has replaced the Conservatives as the option for centre-right voters, there will be no alternative for the people of BC to turn to.

There was promise in 2012, there was also an opportunity to rebuild that hope over the past year and a half, but it has been wasted – and in my opinion, sadly lost.

In Kamloops, I’m Alan Forseth, and I look forward to hearing from you.