"... what happened in Richmond yesterday?"

Earlier this morning I received an email, from a political friend and former BC Conservative Party colleague, asking, "... what happened in Richmond yesterday?"


I suppose that those at the helm of the BC Conservative Party for the past year, and those now running the show, are pleased with the results. As for me however, I am personally very disappointed, and numb.


The results, in my opinion, will only continue the decline of the Party, as no change in direction appears to be on the horizon any time soon. 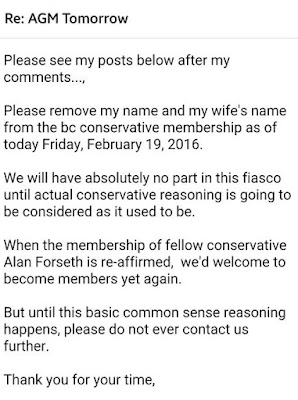 As this letter sent to the BC Conservative Party (and copied to me) shows, the few remaining members will continue to walk away from the party.  And for the record, this letter came from a former Board and Executive member, of one of the largest and most active Constituency Associations in the Province.

Very few of the most solid, and political savvy members, remain in the BC Conservative Party.  Many were waiting, with hope, that sanity would prevail at the BC Conservative AGM held yesterday (Saturday) in Richmond, that there would be something to return to, and that they could help rebuild into a strong political force to contest the next Provincial election in 2017.


Those few who remain in the Party will hold their next AGM in Prince George in September.  At that time they will also be electing a new Leader.


Here's what I predict -- no CREDIBLE individual will step forward to run (who in their right mind would?) ... and ... the likelihood of getting a 50 member quorum to even hold the next AGM, seems at this time, to be very unlikely.

On Thursday I stated ... "May common sense prevail tomorrow, and may the MEMBERS of the BC conservative Party, and those who have tried to defend and protect it, have the opportunity to see it rise once again."