Christy Clark went on the campaign trail saying whatever she had to say to get the votes of British Columbians ... and many believed what she had to say

Was the last BC Provincial election campaign really already three years ago ???  May 2013?  Christy Clark was about to go down to defeat.  The BC Conservatives, only months before, had been closing in on her BC Liberal Party ... and the NDP was ahead in the polls.


'What happened?', many asked days after the results were known on election night.  Bottom line was that Christy Clark pulled a rabbit out of the hat as the NDP began the first in what's now been an ongoing campaign of saying "NO" to quality, environmentally friendly, high paying union jobs ... and regrettably the BC Conservative Party imploded.


What else happened?  Well Christy Clark went on the campaign trail saying whatever she had to say to get the votes of British Columbians ... and many believed what she had to say.


Here's a direct quote, from BC Premier Christy Clark, from the 2013 election:

“We’re securing our future by ensuring that B.C. is a safe, clean, healthy and affordable place to live for every family in every part of the province, and protecting B.C.’s economy and families by balancing our budget”


Three years later, maybe we should do a Reality Check to see how that has worked out for the voters of British Columbia:


Let me say, just in case you're wondering , MSP rates in British Columbia have risen 39 per cent since 2009.


' ... It will cost one or two bucks more per night to camp at many BC parks this year. There’s worry the only holiday some families can afford is slowly sliding out of reach.
It may not seem like a lot but when you add it to a five dollar increase per night last year, it’s starting to add up...' (News 1130 02/12/2016)


'... “I often talk to people in hospital settings, where they have to try to get dropped off because they’re managing on a fixed budget and they’ve got an illness in the family — and perhaps they have to make two or three visits to the hospital in a day,” he (Coquitlam Mayor Richard Stewart) tells us. He calls it (hospital parking fees) a tax on people who are sick, as well as their loved ones....' (News 1130 01/19/2016) 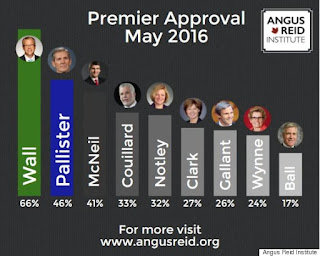 I'm only taking about direct costs that Christy Clark and the BC Liberals have hit us with, or allowed us to be hit with, in the past three years.

These, and many other reasons could be why it now appears her approval ratings have dropped to their lowest point ... just 27% according to an Angus Reid poll ... and she has been on a steady down hill slide now for over a year.  In June 2013, just one month after the provincial election, she was at 45% approval ... last June her approval rating was just 30% ... and as mentioned she appears to have the support of just one in four voters.


The reasons for this dismal drop are many, and the ones I noted above are just a few.  Stay tuned, I'll have more in the days ahead.


Until then, I'm Alan Forseth in Kamloops, and I'm leaving you with this question ... "Will anyone on the centre right be able to mount a credible campaign against her in just 11 short months?"