Public service is not an option for a healthy community or for a democratic society; it is a prerequisite

Steven Puhallo is the Executive Director of the Kamloops North Shore Business Association (NSBIA). He has had a successful career as a public affairs and strategic communications professional with a broad range of experience at senior levels of government and in the private sector.

Today, I have provided him with the opportunity to have a guest post on my blog.

By way of background, Steven is the Executive Director of the North Shore Business Improvement Association (NSBIA) in Kamloops.  Working with the NSBIA board of directors, they visualized and launched the “We Are The North Shore” marketing campaign that has helped re-kindle community spirit.  The organizational also hosts the incredibly popular Overlanders Day summer family festival, which I was honoured to have played a small role in, with Steven and his team, at the inaugural event.

Many of you also know Steven as an active member of the BC Liberal Party, which honoured him with an outstanding volunteer award in 2014.  He has served as a campaign manager, provided strategic insights on numerous election campaigns, as well as serving as the Chief of Staff to several BC government ministries.  This is an individual who is passionate about public policy and democratic participation.

On the personal side, Steven is an active outdoorsman and says he enjoys our beautiful wilderness whenever he can. This he humbly attributes to growing up in 4H, the rodeo community  and working on his family’s ranch in Westsyde. He comes from 4 generations of cattle ranchers and farmers in the Kamloops area.

As nearly all reading this are aware, I am not a member of the BC Liberal Party, nor am I a supporter.  I do however appreciate the dedication that individuals, willing to serve, will offer to others ... no matter what their political stripe.

Public service is not an option for a healthy community or for a democratic society; it is a prerequisite. We hear a lot about ‘volunteering’ and ‘giving’ and how important it is. Public service can take many forms. From military service, where you join knowing it may cost you your life; to waving someone stuck in traffic through so that they can make their turn onto the next street; this is all doing something in the public good. These two examples bookend the different degrees of giving but all come from a want to do good.

But why is it so important?

Public service is the foundation of the freedoms we have and the lifestyles we enjoy.

These are things that now, sadly, we take for granted all too often. That we can travel freely, worship openly, love who we want, study what we want, work where we want and at any profession we seek to train for, live where we want, do what we want. These are the benefits of generations of good people seeking public service as their vocation.

Irrelevant of personal gain or favour, the men and women who have sacrificed their time to serve us, the public, are the foundation of our democratic and just society.

It’s important because without those willing to give of themselves to their neighbours, friends, family, leaders, followers, or to those who are in distress or suffering we lose that which we most seek, love. Love of community, family, even of strangers who our hearts tell us we need to help.

This maxim can be found in the hieroglyphs of ancient Egypt, the writings of The Torah, Chinese philosophical texts, and the Indian epic Mahabharata; it is echoed in religious and philosophical texts the world over. This law of reciprocity is best shown by service to others, by serving the public.

It is best summed up in these two phrases: “What is hateful to you, do not do to your fellow. This is the explanation of life; go and learn.” and “If not us, who? And if not now, when?”

We are blessed here in Kamloops to have such a strong community culture of volunteering and giving. I believe that happens because good people set a standard of love of community and inspire more good people to follow that example.

That’s what did it for me. From teachers, to family members, friends and colleagues; I find myself constantly inspired to do good. To show love of who we are and where we live through public service. 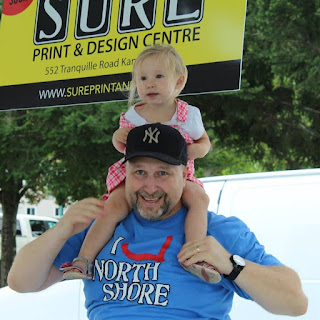 Steven is married to his wife Jennifer; a professional biologist. They have two daughters, Josephine and Sofija, and are proud to raise their kids on the North Shore.

In the spirit of community service, Steven has let his name stand as he seeks the nomination to represent the BC Liberal Party, in the riding of Kamloops North Thompson.  BC Liberals, in that riding, will make their choice on November 19th.