Twenty-seven percent of BCs Provincial Debt is at the mercy of whatever fluctuating interest rates end up at!

This weekend the BC Liberals are meeting in Vancouver, and by all accounts, it's living up to the expectations of a being a Rah-Rah-Rah cheerleading session, leading into next May's general election.  Much of the focus of course is on the economy, with a claim to be leading in Canada ... as well as a claim to be "Spending within our means".

On the claim of "Spending within our means" alone Christy Clark is proudly telling British Columbians that:

Alone in Canada, your BC Liberal government has achieved four
balanced budgets in a row, with a fifth on the way. That’s how BC has
maintained its highest-possible triple-AAA credit rating.

These economic achievements are important because of what they allow us
to do. Every penny we don't spend in interest charges can be invested in
British Columbians and the hospitals, schools, and services we all depend on.

And thanks to this fiscal discipline, BC is on track to be operating
debt-free as early as 2020, for the first time since 1975.

SO ... what is the difference between Debt and Deficit ... at least according the Ministry of Finance?

Debt – represents the money borrowed from lenders for a variety of reasons ...
the province pays interest for the use of the money it borrows and is obligated to repay it at a set date as determined by the terms of the debt instrument...

Why should these figures be of concern to us ... other than the fact debt continues to increase at an alarming rate?  Well the BC Provincial Debt Profile also shows us that 27% of our provincial debt is at a floating rate.

Twenty-seven percent of our debt is at the mercy of whatever fluctuating interest rates end up at!

The good news or silver lining, is at least up to this point, is that the Bank of Canada left its benchmark overnight rate unchanged at 0.5 percent at its October 2016 meeting.  That, according to economists, shouldn't be cause to not be concerned about the future.

In a Globe and Mail story from September 23rd, Jason Wang (TransUnion director of research and industry analysis in Canada) stated that: “Many consumers do understand, but unfortunately some consumers have, in the last few years, developed a false sense of security, thinking that low rates are going to be here forever”.

It went on to quote Scott Hannah, president and chief executive officer of the non-profit Credit Counselling Societies concerns that people at risk might not take action soon enough as interest rates start to go back up.  “The increase is coming. It’s how you prepare yourself for that increase. Now is the time to get prepared”.

Should not the concerns of debt load on consumers, not also carry over to our provincial government? 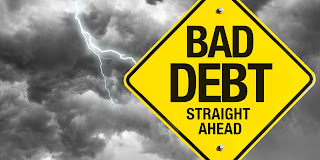 Even with the governments claim they are balancing the budget, and even expecting there will be budget surpluses, DEBT CONTINUES to climb!  How does that square with Christy Clark's claim to be, "Spending within our means"?

Over the next three years the BC Liberals will be adding 7.56 Billion dollars just in costs to service the debt alone -- that's on top of the billions in increased debt!

All I can say is that even someone with a rudimentary knowledge of math skills, can see that's a claim that flies out the window, with just a cursory look at the facts.