If this plan get's the same warnings, from both the Tyee and the Rebel, then that clearly says this is nothing more than crass vote buying


Bill Tieleman and the Tyee ... and Ezra Levant's The Rebel ... are singing off the same song sheet?? Say it ain't so! 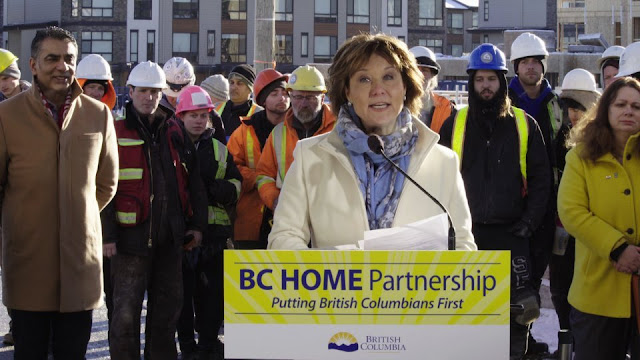 But it is so, and I was as shocked, as you likely are, that they would come at the same story, from the same angle. Both stories, as you can see below, say that:

1.      Christy Clark and the BC Liberals are doing this purely for political gain

... with an election only five months away, the last thing the BC Liberals want to see is for that bubble to burst since it would almost certainly cause them to be defeated ... while this program isn’t as crazy as the kind of policies we saw down south over a decade ago, it is awfully suspect and if there is a major price correction I wonder how many defaulted mortgages the taxpayer will now be partially on the hook for?

Premier Christy Clark’s homebuyers plan provides short-term gain for the BC Liberal Party and long-term pain for those who borrow money from the government, taxpayers and the B.C. housing market ... who cares if some first time homebuyers can’t make their mortgage payment and lose their houses down the road ... the B.C. government plan will increase competition for the already limited supply of housing ...

If this plan gets the same warnings from both the Tyee and the Rebel, then that clearly says this is nothing more than crass vote buying ... but also, as they have both stated, it also comes with a huge potential downside for every single person in BC.

For the voters of BC, many of those at least who tend to vote centre-right, the option for us to have a government that can earn our respect is no where to be found.

What difference does it make.  Election 2017 in BC, I predict, will have the lowest voter turn-out in decades.