BUT certainly the BC NDP, propped up by Andrew Weavers Green Party, could perhaps now be called eco-radicals! 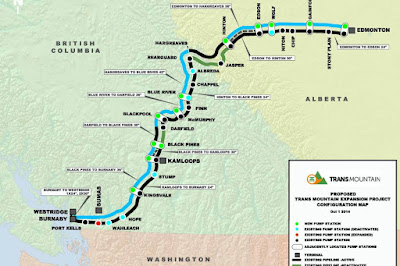 What else do they DESERVE to be called after fully stating that they will do everything in their power to oppose, and shut down, the twinning of the Kinder Morgan Trans Mountain pipeline?

Running 750 miles, this pipeline has operated safely now for sixty four years (since 1953).  Not only does the Trans Mountain pipeline run through Kamloops, it is an important part of the pipeline.  As Kinder Morgan's Trans Mountain Pipeline portion of their website states:

Refined products from Edmonton are routed to Kamloops for local distribution. Kamloops is also a receiving site for products from northeastern British Columbia that are bound for the west coast. The facility contains two storage tanks with a shell capacity of 160,000 barrels (25,000 m³).

Despite the fact this project is LEGALLY able to go ahead (projected to start in September) after being approved by the National Energy Board, a massive opposition continues to grow.  An opposition that is clearly supported by the very government that should be doing everything possible to promote and encourage safe, and environmentally sound, energy projects.

John Horgan's NDP have been opposed to MANY resource development projects, including the Trans Mountain pipeline, but today they clearly had killing this HIGH PAYING / UNION JOB CREATING project dead in its tracks.

They began that process by hiring former BC NDP leader and Supreme Court justice Thomas Berger, to look at current action against the pipeline expansion plan.  He will also be applying to be an intervener in legal challenges to federal approval of the project.

YES ... the BC government -- John Horgan's NDP -- will, as I stated, be doing everything possible to stop this project dead in its tracks.

“We are committed to use every tool to defend BCs coast [from] threat of tanker traffic ...  Our government made it clear that a seven-fold increase in heavy oil tankers in the Vancouver harbour is not in BCs best interests. Not for our economy, our environment, or thousands of existing jobs.”

Uhmmmm, excuse me, Mr Heyman, Mr Berger, Mr Horgan, and Mr Weaver.  Have all of you missed the point that this company has operated a pipeline to the BC coast SAFELY NOW for over SIX DECADES!!

BC Conservatives ... line up your guns (figuratively speaking of course) against the BC NDP, and the BC Green Party.

They are opposed Nationally Energy Board approved as safe projects ...

They are committed to taking every legal step possible to oppose and shut down environmentally approved energy projects ...

They will think nothing of wasting taxpayers resources to hire a former NDO leader as their legal spokesperson and intervener to stall and halt environmentally approved projects ...

They are opposed to thousand of high paying jobs (jobs that would employ hard working union men and woman) ...

In opposing this LEGALLY APPROVED project, they are green lighting so-called environmentalists to do whatever they want to shut down BC's mining, energy, and resource projects.

John Horgan's NDP have essentially told them go ahead because they will also be doing everything they can to shut down this, and other projects.

NO political party in BC is going to say they are not going to deliver proper standards in health care and education.  There's no need to fight that fight when the next election campaign gets underway. 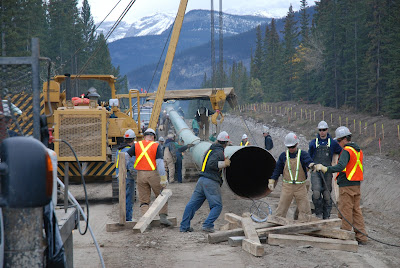 No, instead, target what the BC NDP and the BC Green Party are weak on.  PROTECTING JOBS --- good high paying union jobs in fact.  The kind of union jobs that will generate taxes revenue and wealth for the province.

This NDP / Green Party government is sounding an attack on the well-being and prosperity of our province ... and they are putting at risk the very future of the women and men who continue to build, power, and protect this province.

Here's my message to the BC Conservatives, a message that I believe they should take to each and every British Columbian. Tell them ...

We will not sit idly by while the Green's and NDP prepare to drive our economy into the ditch.

We will not forfeit the economy, or the environment; we can, and will, protect both.

TODAY ... we are serving you with an eviction notice.  Come next election, be prepared to be evicted from the BC Legislature by the majority of voters in British Columbia

Today we take up this cause, for there is nothing greater than the safety, protection, and  well-being of British Columbians ... no matter what their age or generation.

Will they follow my advice?  Who knows?  But a chorus of agreement, swelling from the people of BC, will certainly let them know if this is the right path to take.