When will this never ending vacuum called government, consider enough is enough, and leave us with a few crumbs of our own money?


To fund or not to fund,
That is the question.
Whether tis nobler to fund,
thine own election campaign,
or drink of the trough called gluttony,
called taxpayers money.
No more; and by a sleep (or until the bill is passed),
to say we end the heart-ache (to taxpayers).
And the thousand natural shocks,
as money is siphoned from General Revenue.
'Tis a consummation (of our money),
devoutly being wished
by the GreeNDP
who never once campaigned on it.

With apologies, of course, to William Shakespeare.  I don't know where that came from, but there you go, my very bad poetry will be what gets things underway today. 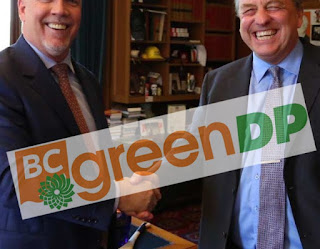 Last week of course came news that the GreeNDP led by Andrew Weaver --- Oooops I mean John Horgan --- (no, wait a minute, who is in charge anyway?) decided that taxpayers would fund political parties to the tune of $2.50 per vote received.  That, my friends, would amount to roughly seventeen million dollars.

As pointed out elsewhere the NDP's John Horgan, just a mere seven months ago, specifically told CHNL's Shane Woodford that taxpayers WOULD NOT be subsidizing political parties, and that Elections BC would, " ... look across the country and around the world at the best way to make sure that only individuals are paying for our political process and election process."

That review by Election BC never happened, and likely never will now.  So, is it any wonder that numerous stories such as these came to pass immediately?

HEADLINES should have read “BC’s Wild West reputation laid to rest.” Instead, British Columbians woke up to “Taxpayers would give millions to political parties in NDP plan,” all thanks to an ill-advised decision to slide two unexpected provisions into the government’s campaign finance reform package ....

... hard to know who to cheer for in Victoria these days ... NDP government is ending the so-called “Wild West” days of campaign financing ... taxpayers will have to pay through the nose to make it happen.

On the other hand, a Kamloops resident, Al Horne, had this to say about my own commentary, which was posted in the Armchair Mayor website, as well as my own blog site:

... that three or four bucks is going to break me. This is evil and perfidy on a monstrous scale. How I already long for the good old days of having government sell my province's assets to its highest corporate bidder...

My answer to that however, is that EVERY year the city, provincial, and federal governments add a few dollars here and there, to our taxes --- and that on top of new fees they find so they can gouge even more of our money away from us.

You can make a guaranteed bet on this ... we will pay more, in some form, to pay for this travesty that the NDP and Green parties are both attempting to tell us is fairness, and a leveling out of the playing field.

Taxation now accounts for half of the income we earn. Pretty soon we'll get to the point where the government simply takes all of our income, and just give us an allowance to live on.

No I do not seriously believe things will ever get that bad here in Canada ... at least not in my lifetime.  Still, when will this never ending suction vacuum, called government,  consider enough is enough and leave us with a few crumbs of our own money?

That will depend on us asking this question of ourselves;
When will we realize that every time we demand government do something new for us because we refuse to do for ourselves, expand an existing program, pay the way for some special interest group, etc etc -- that the money for it comes from somewhere.

No, in the end it will ALWAYS be us that pays the cost.

Are you getting tired of that yet?