FELDSTED: Identity Politics is a strong signal for us to fight back from being dragged into an Ontario - Quebec feud that has its roots in the 1759 battle on the Plains of Abraham 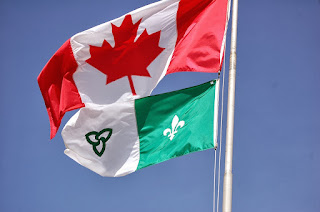 In Prescott-Russell county, about 500 kilometres east of Queen's Park, signs of  pride colour the countryside. In most towns, the Ontario flag is flown next to its green-and-white Franco-Ontarian counterpart, decorated with both the fleur-de-lis and trillium.

This is the riding of Amanda Simard, who left her own party in protest of Premier Doug Ford's cuts to French services. And while the government has made attempts at concessions since then, it's done little to quell the fury among these French-speaking communities….

Let’s get a couple of things straight:


In 1840, the British Parliament created the Province of Canada consisting of what is now Ontario (Upper Canada) and Quebec (Lower Canada) with equal political representation for each. Resulting from that, the Province was ungovernable from 1840 until confederation, a quarter century later.

Representatives from the two political identities could not agree - on anything. No political party could find enough support from both groups to create a working majority government. Elections were held in 1841, 1844, 1848, 1851, 1854, 1858, 1861 and 1863. The deadlock was finally broken with the 1867 confederation of four provinces. However, the fierce rivalry between Ontario and Quebec continued.

The Official Languages Act (OLA) was passed into law in 1969, 102 years after confederation, and is an enormously expensive accommodation to the French speaking population, estimated at over $2.4 billion annually (2006-07 figures for combine provinces and federal government spending).  Ontario spent the largest share estimated at over $623 million or $1,275 for each minority member. Quebec, in comparison, spent $50.5 million annually or $85 for each minority member.

What is frightening is that these figures are now 12 years out of date. Costs will have risen substantially over more than a decade. Using a modest 2% annual increase in costs, they would exceed $3 billion today.

Every taxpayer, irrespective of native language, or ethnicity, is dragged into paying a portion of this subsidy to French speaking people living outside Quebec. The vocal minority in Ontario, screaming that they have a right to subsidies from non-French taxpayers, is a strong signal for us to fight back from being dragged into an Ontario - Quebec feud that has its roots in the 1759 Battle on the Plains of Abraham.

Despite substantial concessions to the French speaking population in the 1774 Quebec Act, the feud rages on.

The Official Languages Act must be repealed and replaced with legislation that provides for French language services in accordance with Sections 16 through 22 of the Charter of Rights and Freedoms. There is nothing therein that prevents provision of minority language services through qualified translators. The notion that government officials and employees must be bilingual is nonsense. Our civil service must be populated based on competence, not language.

We forget that the Charter of Rights and Freedoms exists to protect us from our governments. The opening paragraph of the Charter reads:

The Canadian Charter of Rights and Freedoms guarantees the rights and freedoms set out in it subject only to such reasonable limits prescribed by law as can be demonstrably justified in a free and democratic society.

Since there is no such thing as ‘enough’ in this feud, it is time for English speaking people to declare the level of subsidy they are willing to accept … and pay for. The constitution (which embodies the charter) spells out the terms and they must be adhered to.

Language is not a tool to promote French use in English Canada.