RICHARD NEUFELD: Bill C-48 is an extreme and unprecedented piece of legislation. If passed, Eagle Spirit could be dead

On December 12th, the Senate of Canada was honoured to welcome a delegation of 15 First Nations Chiefs from the National Chiefs Coalition, the Indian Resource Council, and the Eagle Spirit Chiefs Council who, together, represent some 200 First Nations communities.


They were in Ottawa to speak about the Eagle Spirit Energy Corridor Project and how it can help achieve reconciliation through economic empowerment.

My wish is that all Canadians become familiar with Eagle Spirit.

In brief, Eagle Spirit is a First Nations business consortium that proposes to build what has been called the greenest pipeline energy corridor on the planet, running from Bruderheim, Alberta. to Grassy Point, BC. Once completed, the project could ship four-million barrels of crude oil and ten billion cubic feet of natural gas to tidewater every day.

It goes without saying that this $12-billion investment could provide First Nations with a golden opportunity for economic development. Other benefits include billions in revenues from royalties and taxes and good-paying, family-supporting jobs.

The project has the potential of becoming a historic, generational, and nation-building one, given that it will be the first Indigenous-led major infrastructure project in Canadian history.  But Justin Trudeau’s Bill C-48, by imposing an oil tanker moratorium stretching from the northern tip of Vancouver Island to the Alaska border, shatters that dream.

Bill C-48 is currently before the Senate. If it passes, Eagle Spirit could be dead.  That is because the prospective port at Grassy Point is within the moratorium zone. Without tankers, there can be no pipeline. There are no oil-tanker moratoriums in the entire world. If this bill passes, Canada would have the only one.

We are captive to a single customer, and we do not even have sufficient takeaway capacity for selling oil to them. Under this government, no pipeline companies have been able to get to the finish line. Eagle Spirit is seen by many as a solution to this problem.

Canadian and First Nation companies, workers, and their families are suffering.


Unfortunately, our current government has chosen to cater to well-connected activists that have their own agenda, some of whom are not even Canadian.

I am disheartened that the Trudeau government hasn’t made this sector of our economy a priority, and that it continues to provide empty words and promises to hard-working families who want to earn a decent living, provide for their children and contribute to Canada’s prosperity.

What is most unfortunate in this current situation is that First Nations are too often characterized as opposed to natural resource development. That is simply not true.

The example of Eagle Spirit clearly exposes that misrepresentation: many First Nations in this country want to responsibly develop resources to create wealth and opportunity for their people and all Canadians. Many communities already do, to the great benefit of their people. 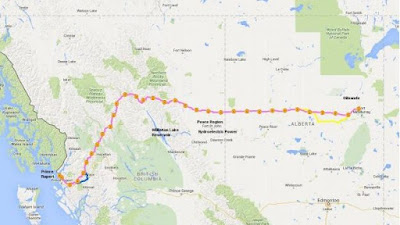 In fact, in the case of Eagle Spirit, it is unanimous. All 35 First Nations situated along the proposed pipeline corridor have indicated in-principle support for this project.

If completed, Eagle Spirit would stand as a remarkable example of self-initiated economic development in Indigenous communities. It could create wealth and pride in these communities. It could help solve an enormous problem — the Canadian oil discount — for which the entire country is paying the price. It would be a win for all Canadians.

Bill C-48 is an extreme and unprecedented piece of legislation. And make no mistake, Indigenous communities are angry about it.


Richard Neufeld is a senator for British Columbia and a member of Senate committees on National Finance; the Arctic; and Energy, the Environment and Natural Resources. He was formerly B.C.’s minister for energy, mines and petroleum resources