The 2019 federal election is over, and undoubtedly many Canadians woke up Tuesday morning wondering just what happened. 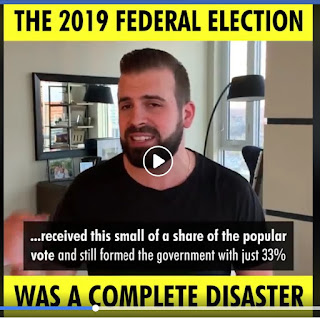 It’s important to look beyond the media spin, and at the actual results.

Yes, the Liberals, by winning the most seats under Justin Trudeau, will form a sizable minority government, but by almost every other metric, this was a complete repudiation of their first term in office.

Compared to 2015, the Liberals lost 27 seats and receive more than a million fewer votes – in fact, the Conservatives actually won the popular vote.  And get this … since 1867, in the history of our country, no political party –- or Prime Minister — has ever received this small a share of the popular vote and still formed government.  Their share was just 33 percent.

But, taking a step back from the actual results, let me just say that objectively, this was a terrible election!

NOT ONCE did I hear anybody articulating a vision for Canada.

Every four years Canadians go to the polls, and we deserve a frank and honest debate.

Every four years when we go to vote, Canadians should get better than this!

Aaron Gunn is an advocate for taxpayers and common sense. Throughout his work and notably in his role as Spokesperson for BC Proud, Aaron has been a voice for citizens across British Columbia and Canada. Prior to his work for BC Proud, Aaron worked for the Canadian Taxpayers Federation (CTF).