ADAM OLSEN - From what I have seen, the federal Liberals' Oceans Protection Plan is little more than a marketing campaign for their new pipeline program


We learned last weekend that the federal Liberal Party is committing, in their campaign platform, to phase out open-net fish farms on the British Columbia coast.

That is the good news. 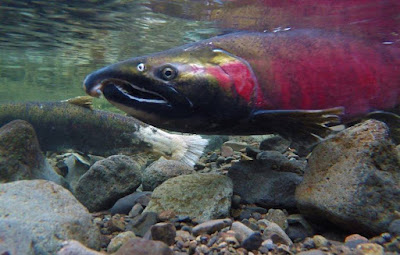 As a Member of the British Columbia Legislature, I have dedicated a tremendous amount of energy and time advancing wild salmon policy.

From disease to sea lice, fish farms are a big problem for wild salmon so I fully support this platform promise. Over the past couple of years, I and my BC Green Caucus colleagues have been demanding the BC NDP act on the promise they made while they were in opposition to get open-net fish farms out of our waters.

Unfortunately, I feel this platform announcement is a desperate fishing trip for votes on the west coast. In the CBC article highlighting this plank, incumbent Liberal MPs from the east coast came out strongly in opposition to the proposal.

They have had an incredible opportunity to begin the transitional process to closed containment over the past four years but they have done absolutely nothing except fight their own citizens who want action.  Now, with an election in play, we have seen a government perpetually scrambling from one announcement to another with no clear vision for our coast.

I was appointed to Premier John Horgan’s wild salmon advisory council. We began serious policy work on wild salmon. The council had a wide range of interests around the table and in a relatively short period of time we put forward an integrated and thoughtful program focusing on wild salmon habitat protection and restoration, working collaboratively with Indigenous communities and supporting the fishing industry.

Since then, the response from both levels of government has been a patchwork of political announcements. I’m thankful that the federal and provincial governments have invested more than $140 million in the restoration and enhancement of wild salmon habitats. However, there appears to be no clear strategy to how they are spending it. It’s not that those who have received funds so far are unworthy; rather, I expected to see a more cohesive, strategic approach that builds over the five-year time-frame of the program.
I welcome the commitment from any (and every) party to immediately begin the transition of fish farms to closed containment systems. The damage to our coast has been great, so the issues facing wild salmon and fish farms need to be more than just a platform plank to lure votes.

We have seen so much politicking around the critical issues on the west coast that it’s become very difficult to accept what the Minister of Fisheries and Oceans says. Instead, I evaluate the actions.

Believe it when I see it!

From what I have seen, the federal Liberals' Oceans Protection Plan is little more than a marketing campaign for their new pipeline program. They have done even less to better organize anchorages, enforce fishing and vessel traffic traveling through no-go zones (another desperate announcement this Spring) and so on.

While the federal and provincial governments have made important investments, rather than a coherent plan for our coast, the federal Liberals' work has been a reckless attempt to address the impact of the pipeline they bought on the Southern Resident Killer Whales.

What British Columbians deserve is a comprehensive plan to restore and preserve wild salmon on the Pacific coast, not a federal government that plays our citizens for votes. So, when it comes to phasing fish farms out, I’ll believe it when I see it.

In the meantime, I will continue to dedicate my work to that end.