ADAM OLSEN - It does not create any new rights; it simply affirms what has always been in place and what has been recognized by Canadian courts for decades


When the Honourable Scott Fraser stood and introduced the Declaration on the Rights of Indigenous Peoples Act, it signified the most substantial change in Indigenous relations in the history of our province. This bill is the right thing to do because it pays respect to basic human rights and provides a path forward for British Columbia to ensure economic prosperity to all of our citizens. 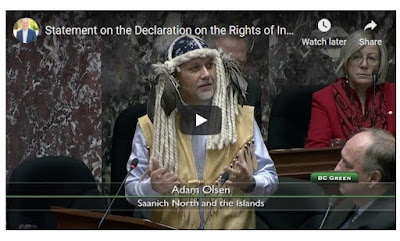 This legislation is a foundational piece of the BC Green Caucus Confidence and Supply Agreement with the BC NDP. It's an initiative I've been championing with the Minister for over two years.

At the same time as inquiries, such as the Missing and Murdered Indigenous Women Inquiry acknowledge genocidal atrocities, until yesterday, we can find almost no laws that undo the colonial legacy of British Columbia.

This Bill changes that pattern. It acknowledges the basic human rights that generations of Indigenous people have fought to have recognized and that have existed in Canada’s constitution for decades.

The legislation itself is quite short. There are ten sections in total, but rather than going into detail on each section, I want to highlight the main components of what this bill does:

This Bill is enabling legislation and it doesn’t change anything overnight. It enables the government to do things differently and it sets our province on a new course for working in collaboration with Indigenous Peoples.

The legislation that was introduced yesterday finally creates certainty in British Columbia.

Right now, Indigenous rights are often ignored and the result is uncertainty over land and resource decisions – ultimately ending up in court battles. These court battles have cost billions of dollars, lost significant time, caused incredible waste, and created a culture of conflict that has stymied economic growth and investment.

This legislation is a critical guide to help us move forward and out of the dysfunctional patterns and cycles of despair. This Bill accelerates the work and the acts of reconciliation.

The United Nations Declaration on the Rights of Indigenous Peoples (UNDRIP) is the product of decades of deliberation, a feat of deliberative democracy undertaken by many States, including Canada, and Indigenous People from around the world. It does not create any new rights; it simply affirms what has always been in place and what has been recognized by Canadian courts for decades. The purpose of this legislation is to avoid forcing Indigenous people into endless court battles to defend the rights that already exist.

Finally, this Bill requires the province to obtain "free, prior and informed consent" of Indigenous Nations. “Consent” does not mean a "veto”.

Consensual relationships are ones that are inclusive of Indigenous people from the beginning, founded on good faith to create mutually beneficial outcomes. While this legislation represents a big step forward in reconciliation, it is just the beginning.


Adam Olsen ... is a Green Party Member of the Legislative Assembly of British Columbia for Saanich North and the Islands. Born in Victoria, BC in 1976, Adam has lived, worked and played his entire life on the Saanich Peninsula. He is a member of Tsartlip First Nation (W̱JOȽEȽP), where he and his wife, Emily, are raising their two children, Silas and Ella.