ADAM OLSEN -- Many of the responses we have heard from industry, to the Liberals’ campaign announcement for the west coast, is deflection and distraction - it’s interference


Following the Liberal Party of Canada’s platform announcement that they are going to shutter the open-net fish farm industry by 2025 transitioning it to closed-containment, I wrote a post stating my skepticism.

Another result of that announcement has been a daily flow of emails from the Google Alert that I have tracking “fish farms.”

With the Liberals making this a platform priority, hopefully with more sincerity than “this will be the last election under first-past-the-post” -- and -- “there is no more important relationship than the one with Indigenous people”, the salmon farming industry has been furiously publishing articles about their opposition to this promise.

Needless to say, the industry is extremely unhappy with this commitment from the Liberals. There are now a majority of federal political parties that have committed to acting on transitioning the salmon farming industry to land-based systems.

Fish farms have no social license

Video of deformed salmon, sea lice outbreaks, pipes flushing massive amounts of blood-water into the ocean, and a battle between scientists over disease and the negative impact on wild salmon have all contributed to a growing tension on the west coast.

At the end of the day, the fish farming industry has lost its social license in British Columbia and this platform commitment from the Liberals is just the latest proof of that.

It’s not even the rural / urban wedge that industry representatives want to drive into the communities in our province. It’s a matter of profit. This is really about the ability of multi-national corporations to freely pollute the environment.

The cost of that pollution is borne out by British Columbians, it’s put on the coastal communities. This is the externality - the costs of operating the business that can be omitted as long as we allow industry to continue to treat the environment like a garbage dump.

When the industry complains that the cost of moving to a closed containment, land-based, or recirculating aquaculture system (RAS), is going to increase their cost, what they are saying is that they don’t want to internalize the externalities. They make less profit when they are forced to actually deal with the mess they create.

So when we see a vessel pumping huge volumes of fatty, pink liquid into the ocean following the farmed salmon die-off in Atlantic Canada, and the industry response is essentially “don’t worry, it’s all good because it’s organic matter”, they are running interference. 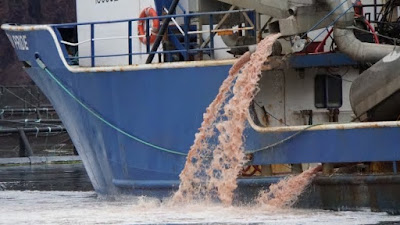 Many of the responses we have heard from industry to the Liberals’ campaign announcement for the west coast is deflection and distraction - it’s interference.

For the past two years, the BC NDP government has been under tremendous pressure to not renew fish farm tenures and work with the federal government to push industry to make the transition. I and my BC Green colleagues have been amplifying the pressure on government as well.

Transitioning to the changing landscape
The federal Department of Fisheries and Oceans and their elected leaders have been reluctant. However, with the recent campaign announcement, it should be clear to the industry that the landscape has changed. British Columbians do not accept the industry’s excuses as to why we should allow them to continue to profit from our ruin.

The industry did not take seriously the calls two years ago that they should be moving quickly on the transition from open-net systems to closed containment or RAS. They have lost two years and a lot of goodwill.

Now they are saying that the five years the Liberals are giving them is not long enough. The clock is ticking and every moment wasted now is a moment they may wish they had later.

Let’s move much quicker from threats and interference to working together to make this transition happen.

If the multi-nationals are not willing to make the change, someone else will and, in the short-term, government must be part of the solution.