According to a media release from earlier this afternoon, Alberta’s new budget, presented by Jason Kenney’s United Conservative Party, will take bold action to get Albertans back to work. The government stated it will create the right conditions to bring jobs, growth and investment back to Alberta while getting their fiscal house in order to stop the reckless dive into debt.

The release indicated ... it will do so by cutting taxes on job creators, removing red tape and supporting skills training to grow Alberta’s economy and increase our self-reliance.

On spending, Alberta’s new budget includes a moderate 2.8 per cent spending reduction over four years and protects front-line services, including funding for health and education.

The spending restraint is paired with a prudent economic forecast positioning Alberta to deal with future economic uncertainties. Budget 2019 forecasts a gradual climb in revenues in 2019-20 – with total revenue estimated to be $50 billion, $392 million higher than in 2018-19.

Budget 2019 also maintains or increases funding for core social services. For example, Children’s Services spending will increase by 15.2 per cent and Community and Social Services’ budget will expand by 7.6 per cent over four years.

Travis Toews, President of Treasury Board and Minister of Finance stated that, “We are focusing our resources on those who need it the most. We’re very happy to be able to provide more funding for children, seniors and families.”

The 2019 capital plan sees continued support for critical ongoing projects that reflects needs in areas such as health and education.

Highlights of the budget include: 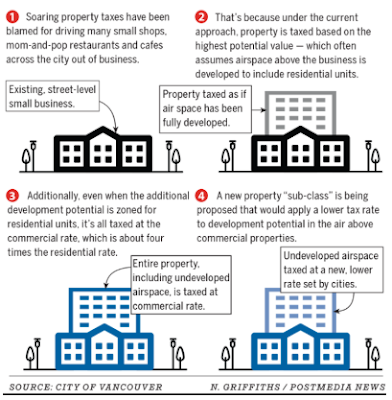 Meantime here in BC, just one example of how John Horgan’s NDP government continues make it hard for small business, is it’s continued failure to see taxing, of non-existing retail space above small businesses, end.

Yesterday (October 23rd) Todd Stone, MLA for Kamloops - South Thompson and Opposition Critic for Municipal Affairs and Housing introduced a bill in the legislature that will enable local governments to reduce property taxes on unused airspace above current small businesses through a new commercial property sub-class.

Stone stated, “Many small businesses, arts groups, and non-profits—most notably in the Lower Mainland—are facing huge tax spikes on the air above their heads”.

He then continued, “In some cases, organizations have seen 200 to 300% increases in property tax bills because they’re assessed at the highest and best use related to the undeveloped airspace above them. Despite urgent calls from local governments and stakeholders, the current government is not acting fast enough as small businesses struggle to survive and neighbourhoods are hollowed out.”

Additionally, BC’s government, unlike Alberta’s, has no real plan to reduce debt, nor the millions paid to service that debt.

Meantime Finance Minister Toews stated, “This budget reflects our commitment to living within our means, ending a nine-year run of government overspending and balancing the budget by 2023. It also includes supports to drive investment and help businesses succeed, while fuelling the economy and creating well-paying jobs for Albertans”

Our British Columbia economy is failing – and that’s not an unsubstantiated comment from me – BC Stats Infoline indicates that as well.

It’s time to end that ... it’s time to get industry and small business back on its feet again.