BC Green Party Andrew Weaver asks Provincial Council to launch a leadership contest, so that the party will be well positioned for 2021 with a new generation of leadership


A SHORT TIME AGO ... BC Green Party Leader Andrew Weaver announced that he would not be seeking re-election in the next scheduled provincial election, in 2021.  The following is a message he sent to members and supporters just after 10am.

Being an MLA has been one of the most fulfilling experiences of my entire life. Making this decision was not easy, but I make it having achieved what I set out to do in running for office: get BC back on track as a climate leader.

Our province has now embarked on an ambitious plan to sustainably propel our economy forward, while ensuring that we do our part to reduce our greenhouse gas emissions.

To be sure, our work continues – Adam, Sonia and I are anxious to return to the legislature today for the first day of the Fall sitting. We have significant work ahead, which I look forward to sharing with you in the coming weeks. 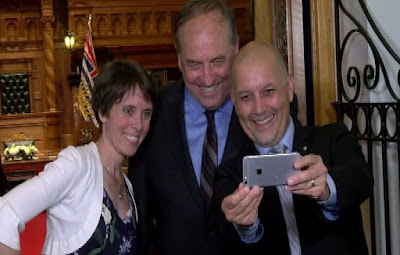 However, I must also be sure to keep an eye on the needs of the party, particularly with regard to the next election. In that light, I have asked Provincial Council to launch a leadership contest, so that the party will be well positioned for 2021 with a new generation of leadership.

It is a sincere privilege to serve as your leader. Together, we elected North America's first provincial Green caucus, championed a collaborative form of politics, and reformed many of our institutions and sectors, from campaign finance reform to livable wages and benefit corporations. We have much to be proud of and more still to look forward to.

I will continue to lead the party until a successor has been selected by the membership. Our party's Chair, Sat Harwood, will follow up with details about the leadership contest.

For more information on my decision, you can read the party's press release here and watch the announcement I made in Victoria here. I will also be publishing a blog post on my website shortly.

As Greens, we have many more opportunities in the near-future to build the world our children deserve, not least of which is the Oct. 21 federal election. Greens are poised to make a major breakthrough and possibly have the type of positive influence nationally that we have demonstrated here in BC. Please be sure to vote in the advance polls that begin this weekend (Oct. 11 to 14) or on general voting day, Oct. 21.

With gratitude for your ongoing support and commitment,
Andrew