Beware of herd mentality. Why adopt a belief just because it conforms to what the vast majority thinks? Isn’t it healthy to question what we are told or read? Shouldn’t we use the brain we were given for independent thought?

In the 1600’s, Galileo argued in favour of a controversial theory that had been promoted by Copernicus who came before him. This theory was wildly out-of-step with dogma set by the establishment of the time. Like Copernicus, Galileo was written-off as a quack. His ridiculous opinions flew in the face of what the scientific community knew to be true. 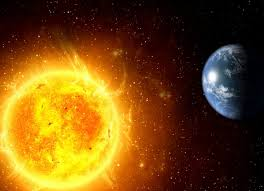 Despite massive criticism by his colleagues, he continued to speak out. He put forward that the Sun did not revolve around the Earth. It was the other way around. The Earth revolved around the Sun.

This theory was known as “Heliocentrism”. This alarmed the church and state. If Galileo’s dangerous ideas spread, it could threaten their ability to maintain public order, and their authority (power). So, they labelled him as a heretic. Galileo was arrested, tried, and convicted. He ended up spending the rest of his life under house arrest.

Now many centuries later, we laugh at how naive people must have been in those days. What fool could possibly believe the Sun revolves around the Earth?!?! Then again, people once believed the Earth was flat too. The question that needs to be asked: Is society really any different today?

The results of tomorrow’s federal election will have far-reaching impacts beyond the next four years. Forget all of the other stupid things Trudeau has done; the debt should be a key issue, but it was not. The mainstream media gave Trudeau a free-pass on fiscal responsibility.

During the previous campaign, he PROMISED he would balance the budget in 2019 (he didn’t). Then again, he also claimed the budget would balance itself, and people believed it! This, proves the point above in regards to the Flat-Earth Society. In their term, the Federal Liberals dramatically ramped-up the long-term debt.

Even more worrisome, we are likely headed for a minority government, which will leave Trudeau with no choice but to partner-up with the NDP to form a collation. The concessions required will set us on a course of uncontrolled spending that will bankrupt our future, and for the next generation.

Before voting, each and every one of us ought to inform themselves about the long-term impact of debt and continued deficits on our country.

We should also be asking ourselves just how it came to be that global warming, and climate change, dominated the election. Changing opinion has already shaped government policy to the point where we knowingly handicapped ourselves in regards to energy independence. We have been tricked into believing our dependence on fossil fuels is the cause, and those evil people in the oil and gas industry are the ones to blame. It has happened quickly, yet the work is not yet complete.

While we are outraged at how foreign interests keep trying to influence our election, we have collectively turned a blind-eye on allowing foreign agencies to fund climate protests here in Canada. Instead of showing Greta Thunberg and company the door, we not only tolerate her, we welcomed her interference in shaping opinions just prior to an important election.

Who is pulling the strings? Who is funding the campaign, and what is their real agenda? Why is she here instead of China, India, or any number or other countries where pollution runs rampantly out-of-control?

I know some of you may think I am a heretic, as the popular media hasn’t run any stories in line with what I might have to say. After all, it is counter to everything they KNOW to be true. Regardless, here is my controversial opinion.

Is it possible then, that the planet’s changing elliptical orbit around the Sun might be the primary cause of long-term temperature and climate change? Check it out. Look up “Milankovitch cycles”.

My informed opinion (based on personal observations, recorded history, and theories I read) is that temperature fluctuations and climate change are NORMAL. These things are not at all new. They are part of nature. It has been this way from the beginning. And it will be this way to the end. I do not expect you to just blindly believe it. All I ask is that you open your mind to considering other opinions.

Don’t be a lemming. Do not jump off the cliff.

Do not believe Chicken Little. The sky is NOT falling!

Dalton Hooker is a former long-time radio broadcaster. He also spent three terms as a councillor in the City of Quesnel.