FELDSTED - The government and indigenous people have different definitions and there is “no meeting of minds”. Until there is, there can be no reconciliation 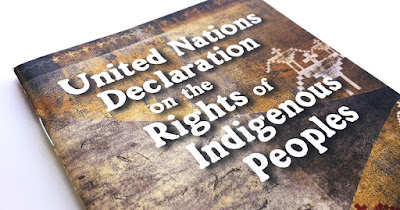 Our “leaders” are really followers -- they are not interested in acting in the best interests of Canada and her people.

Four of the six party leaders are in favour of writing the United Nations Declaration on the Rights of Indigenous Peoples (UNDRIP) into Canadian law. That will add to the complexity of reconciliation. If we were to adopt the UN Declaration (promulgated in 2007) it should be based on replacing all existing treaties.

A serious impediment to reconciliation is the failure to reach an agreement on what “treaty rights” are, and are not. The government and indigenous people have different definitions and there is “no meeting of minds”. Until there is, there can be no reconciliation.

Adding another set of “rights” created by an unelected body with no responsibility for the outcome of imposing the declaration on Canada will result in problems our leaders are not considering. There has been no serious discussion or debate on the merits of adopting UNDRIP ... which is a disservice to all Canadians, including indigenous people.

A UN working group started the process of drafting a declaration in 1988, and a first draft was prepared in 1994. On 28 December 2006, the Third Committee of the General Assembly (Social, Humanitarian and Cultural) adopted a draft resolution to defer consideration and action on UNDRIP by the General Assembly, with the aim of concluding consideration of the Declaration before the end of its current sixty-first session.

Under a revised draft resolution, whose main sponsor was Peru, with several European and Latin American countries listed as co-sponsors, the full text would have been adopted by the Assembly in relatively short order. But an initiative led by Namibia, co-sponsored by several African countries, resulted in the draft being amended.

In May 2016, the government Justin Trudeau officially removed Canada’s objector status to UNDRIP, almost a decade after it was adopted by the General Assembly. There was no public discussion or debate on the issue before the change was made.

The legislation was due back in the Senate Chamber this week, where it remains essentially stalled by pushback from Conservative senators who opposed parts of the bill, mainly a section they argue would give veto to Indigenous groups over natural resources projects.

Our leaders are not considering that adopting UNDRIP must not be done without a close examination of unintended consequences. That is not leadership, or fair to Canadians.