FELDSTED - Hell’s bells, we can’t put trust in the smoke and mirrors presented


The 2019 federal election campaign makes it clear, with one possible exception, that political leaders have no interest in serving anyone but themselves.

The possible exception is Maxime Bernier who appears interested in ethics and principles that will serve all Canadians. Bernier is disliked because his opponents have abandoned ethics and don’t like him raising issues they usually avoid. 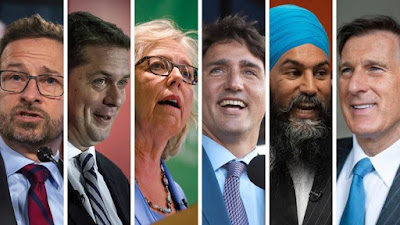 Justin Trudeau has a dismal record to overcome and has no discernible leadership qualities. His recent defense of “irregular immigrants” indicates he has no intention of obeying the law which is consistent with his actions in SNC-Lavalin and Vice Admiral Norman debacles. His disparaging commentary on conservative premiers is inappropriate, combative and unacceptable. Trudeau cannot take cheap shots at provincial premiers and expect them to cooperate on other issues such as inter-provincial trade and the most important public issue - health care. We cannot continue to be governed by someone who disdains the law and is unwilling to work with the provinces.

Andrew Scheer is not burdened with a poor track record but is less known which means we have less to judge him by. He has not given us the confident, strong voice we are looking for and fall into the trap of disparaging Trudeau. Trudeau has an effective, tested manure spreader and employs it with aplomb. He is weak on ethics, honesty, issues and policy. Leaders don’t take on an opponent’s strong points. Political manure fights make them all look unworthy. Scheer has not adequately separated himself from Trudeau to quell the “liberal – tory, same old story” meme. Scheer seems to be campaigning as the lesser of evils which is not comforting.

Jagmeet Singh has handled himself well overall and made some impressive moves. However, his pledge to allow Quebec to block pipelines is an unacceptable capitulation of federal constitutional responsibilities and his failure to come out very strongly opposed to Quebec Bill 71 is reprehensible. We support human rights, or we don’t. We refuse to accept discrimination, or we don’t. There is no middle ground. There is a separation between church and state or there is not. The Quebec government cannot ban religious symbols without getting into the religion business (again). It did not work well prior to 1970 and will not work well in the future.


Elizabeth May wants sweeping powers without accountability. She is safe from having to account to anyone for her platform. She is a globalist, content with having Canadian policy dictated by an unelected, unaccountable and dysfunctional United Nations. Her stand on climate change is not acceptable. We cannot reduce carbon emissions by methods she is proposing without careful consideration of the effect on our society and people. She has no independent research on the causes of climate change and consequently has no idea of what portion of human activity has on the overall causes of climate change. She is a follower, not a leader.

Yves-François Blanchet managed to carry off his role as a national pain in the butt with finesse. None of the other ‘leaders’ saw fit to put him in his place following some of his more outrageous statements. The Bloc Québécois was formed in 1991 as a coalition of Progressive Conservative and Liberal MPs from Quebec, who left their original parties after defeat of the Meech Lake Accord. The BQ was intended to be temporary and had the goal of the promoting Quebec sovereignty at the federal level. The party aimed to disband following a successful referendum on secession from Canada.

Maxime Bernier has the most common sense, practical platform of the lot. The People’s Party was formed on September 14th, 2018 just 13 months ago. Bernier has not had enough time to become well known but his approach to serious reformation of how the federal government operates, including adherence to its constitutional responsibilities, is long overdue.

Our parliament is dysfunctional, and the current election campaign is a clear indication of why. We are not presented with a clear outline of what any political party’s plans are for the immediate future, why the issues it has chosen as priorities are most importantly, how plans will be executed and what the costs are.

We get a mobile of vague and expensive promises dancing in the air with a request that we trust them. Hell’s bells, we can’t put trust in the smoke and mirrors presented.

Politicians haven’t even gotten the public’s attention this year, let alone captured its imagination. They need to get reacquainted with the world and environment the public inhabits. Then they can converse with us as the equals we are rather than as some grey blob they can manipulate.