“Andrew Scheer remains convinced that a prime minister can hold conservative views on divisive issues like same-sex marriage and abortion, and still be trusted by Canadians not to impose them on the country.”  ~~  CBC News

Scheer’s personal views should be confidential. When Sheer is on stage, he is not representing Andrew Scheer; he is spokesman for the conservative party and its supporters. 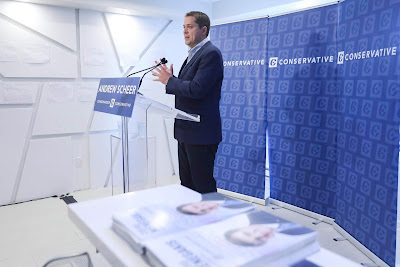 When Scheer is asked about his views on marriage, the response should be: “The Conservative Party of Canada will uphold the equality of gay people in all matters and their Charter rights.”

When asked about abortion, the response should be: “The Supreme Court stuck down restrictive sections of the criminal code that violated the Charter rights of women. The Conservative Party of Canada will oppose any efforts to infringe on the rights of women to choose the alternatives appropriate for them.”

Women and gay people don’t care about Scheer’s personal views. They need assurance, in clear, unequivocal language that their rights and freedoms will continue to be protected. Scheer failed to make that clear commitment and got himself entangled in trying to communicate that he would not impose his personal views as Prime Minister.

Conservatives and their representatives have a broad range of personal views. Those we elect have a duty to express themselves in caucus and abide by the majority decision.

No one person, including the leader, can force his or her views on the others. That is fundamental to democratic governance.

It was a costly rookie error.

Scheer is harming himself by not admitting the error, and putting the matter to rest. Continuing his election race stand will not satisfy critics, or win him any new supporters. Canadians need his assurance that his party will uphold the law and fight for the freedoms and rights of all Canadians.

Nothing less will suffice.