FELDSTED -- Time allotted for ‘free exchanges’ was a waste. None of those segments were helpful in determining who to trust

With a couple of million others, I watched the two-hour marathon of verbal mayhem and am not impressed. We were hoping to get some insight into who we can trust to lead the nation for the next four years and left disappointed. There were no knockout blows and no clear winner.

In my opinion, Andrew Scheer and Jagmeet Singh fared best.

Singh was at ease, comfortable, managed to make a joke or two and overall refrained from constantly attacking his opponents. He scored points by being conciliatory on important issues.

Sheer weathered a storm of attacks with aplomb and mostly provided measured and reasonable responses. He lost some points by overdoing attacks on Trudeau.

It doesn’t dawn on any of the contenders that we don’t care what they think of their opponents and their opponent’s platforms. We have minds of our own and can assess party platforms.

One thing that bothered me was the continual references to the Harper government. Mr. Harper was defeated in 2015 and Trudeau has held the reigns of power for the past four years. What Harper did or didn’t do is irrelevant. He is not running for office.

The same holds true of continual references to conservative provincial leaders. The provinces and federal governments have separate powers and responsibilities. Childcare, education, health care and housing are all under provincial jurisdiction. The leaders do no one favours by raising these issues in a federal election campaign, as if these are topics the federal government can deal with.

I did note that at one point, Trudeau stated that Harper had stopped meeting with Premiers. It was Trudeau’s father Pierre who removed the requirement for an annual first minister’s meeting from the constitution when it was amended in 1982.

Elizabeth May lost points by insisting we face a climate crisis every time she spoke. She was adamant that we must take drastic action to combat climate change and that everyone must be on board. It did not occur to her that her plan cannot be implemented in a democracy. Requiring us all to adopt her climate change ideology can only happen in a dictatorship. I will pass on that one.

Trudeau exhibited a “deer in the headlights” look when confronted and responded with his usual talking points. He is an accomplished actor and seemed to sense that he was losing his audience. 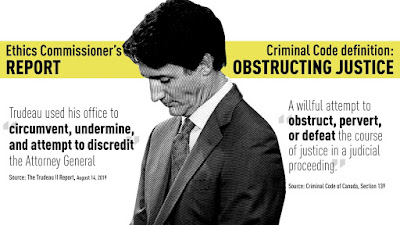 Scheer scored points when he confronted Trudeau about his statement that the initial Globe and Mail story on SNC-Lavalin was not true and later when he accused Trudeau of “donning a different mask” when he was dealing with each of a variety of issues. Trudeau claimed to be a champion of indigenous rights but fired the first indigenous Attorney General in Canada for doing her job. He claimed to be a feminist and champion of women’s rights but fired two competent women who dared to disagree with him.

The moderators bombed in my opinion. We lost about a half hour of debate when moderators allowed participants to talk over one another resulting in unintelligible gibberish. Time allotted for “free exchanges” was a waste. None of those segments were helpful in determining who to trust.

I am not sure that Scheer managed to convince viewers that he is a rational and trustworthy alternative to Trudeau. As I said above, the mayhem of the debate made it difficult to reach any clear conclusion.

My conclusion at the end of the debate?  I fear for the future of our nation.