IAIN CURRIE - The most important issues affecting people of this riding closely mirror issues affecting the country as a whole: climate change, a changing economy, and a growing democratic deficit


Today, we present the second in a series of candidate profiles, for the federal riding of Kamloops – Thompson – Cariboo. Last Friday the first profile, featured PPC candidate Ken Finlayson.  Both Conservative candidate Cathy McLeod, and NDP candidate Cynthia Egli have indicated they intend to have their profiles submitted, to they can be included – federal Liberal Party candidate Terry Lake, however, has yet to respond. 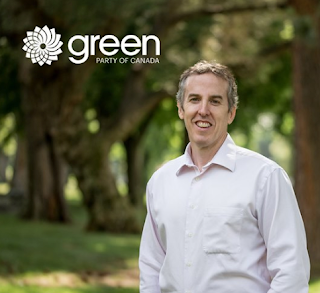 Today, we feature Green Party candidate Iain Currie.  We begin with a brief bio as submitted by Mr. Currie:


Iain Currie is a father of three, and was born and raised in Kamloops. After completing law school at the University of British Columbia, Iain returned to his hometown to serve the public as a prosecutor for nearly eighteen years at the Kamloops Crown Counsel office - including five years as Deputy Regional Crown - taking on some of the highest-profile homicide cases in the province. In 2017, Iain left the Crown to return to private law practice in order to avoid potential conflicts of interest after meeting the love of his life, Lisa - a medical doctor who frequently serves as an expert witness in murder trials.

How has your work experience, and community involvement, impacted your decision to run as a candidate in the federal election?

I felt compelled to do something to address the gap between the future I foresaw for myself as a boy growing up in Kamloops and what my own children can look forward to without some real action to address the climate crisis.

As a lawyer, and a Crown prosecutor for most of my career I have the experience of public service -- evaluating complex problems in the light of the public interest -- and the skills to communicate effectively. I stepped forward to be a leader in the community where I have lived most of my life, because I believe we can do better for future generations.


What do you believe are the 3 most important issues for the people of the Kamloops Thompson Cariboo riding?

I believe - and this is also reflected in conversations I’ve been having on doorsteps - that the most important issues affecting the people of this riding closely mirror the biggest issues affecting the country and even the world as a whole: climate change, a changing economy, and a growing democratic deficit.

Here, we can see the effects of climate change in the form of, for example, increasingly common and severe forest fires that affect the safety of our communities, the quality of the air we breathe, animal habitat and the resource base upon which so many communities and people depend.

The mill closures that have struck at the heart of so many communities in this riding and in BC this past year are symptomatic not only of the effects of climate change, but of a boom-and-bust economy that prioritizes quick corporate profits ahead of long-term, sustainable jobs for communities. Disruptions in global trade and the rapid growth of automation and artificial intelligence will every sector of our economy (indeed, it already is), and governments need to help workers and communities build resilience in the face of these developments.

One of the most common sentiments I hear when knocking on doors is that politicians don’t listen to or care about ordinary people, and that their votes barely matter. Loss of faith in our democratic institutions is a dangerous thing, and could ultimately lead to the loss of democracy itself. This democratic deficit must be addressed, and politicians can help do that by refraining from negative campaigning, and by being responsive to their constituents once elected, rather than merely respond to the needs and demands of the party they were elected under.


What are the three most important issues to Canadians as a whole?
I believe that the most important issues for Canadians as a whole are the same as for the riding of Kamloops-Thompson-Cariboo: climate change, a changing economy, and the democratic deficit. These issues affect different parts of Canada in different ways, but the underlying issues are the same.

Would you agree with the following statement, “Good ideas for the betterment of Canadians can come from anywhere, and should be supported by all members of parliament, regardless of party affiliation” ... and why?

Yes, I firmly believe in this statement. In fact, this is a hallmark of the Green Party’s approach to politics as well. We believe that it’s more important to get the right things done for Canadians than to get the credit for them, and that means working across party lines and supporting good ideas wherever they may arise.

Furthermore, the Green Party has a policy of “no whipped votes”, i.e. the party and its leader does not and will not direct its MPs on how to vote on any given bill in Parliament. Instead, Greens see the responsibility of MPs as being first and foremost to represent their constituents, with the party coming second. This frees individual Green MPs to support initiatives from MPs in other parties, at their own determination.


What do you believe is the most important role for a Member of Parliament?

An MP should first and foremost represent the people in his or her riding, not the MP’s party or its leader.


In the past, this riding has been represented by the Liberals, NDP, and Conservatives, and on several occasions by the opposition or third party in the House of Commons. Do you believe it is better for an MP to be part of the government side of the house, to enable them to more fully serve constituents?

In this election, there is no more powerful message that can be sent to Ottawa than to elect a Green MP from the interior of British Columbia. Elected Greens are well-known for their strong level of engagement with their constituents.

As MP for Kamloops – Thompson - Cariboo, I would serve my constituents over my party, and work with MPs of all other parties to get real, urgent action on climate change, to ensure that we lead the transition to a clean, green economy, and to change the way politics is done in Ottawa.