If you want greater sensitivity to western needs and concerns, greater fiscal responsibility, and a rational approach to resourced development, then vote Conservative


How I am voting this election ...

I’ve voted for (the Conservatives) Cathy McLeod several elections running, I believe her service to be excellent and effective. I know (the Liberals) Terry Lake and find him an agreeable person. So, my decision is absent consideration for either of these two individuals, both are competent. 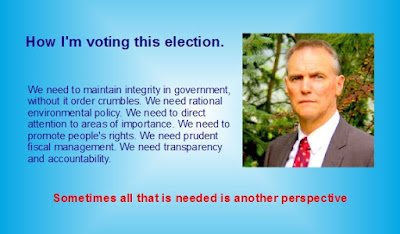 Nor am I a rampant partisan, all things being equal I'll vote conservative due to a long family history with the party, however, for example, I was excited about the Liberal Party's leadership under John Turner and Paul Martin, and found much of what Jean Chretien did agreeable.

I am voting Conservative again, and I am asking you to as well.

The most critical argument in my case for the Conservative Party is, above all, government procurement processes must be honest, transparent and adhere to the highest ethical principles.

The judicial system must be independent. No matter the short-term cost, people or entities that seek through graft, violence or political influence to corrupt government procurement, or process anywhere, must be brought to heel.  Under no circumstance can government be in league with, or seen to be in league with, corrupt operators.

It is my belief the present Liberal government has been attached to corrupt parties and as such, they have lost my confidence.

One can argue as to the validity of many of the assertions of the climate activists. If one assumes, then, that fossil fuel use must be curtailed, the Carbon Tax fails. The Carbon Tax is just stupid policy - period. One hundred years of price sensitivity analysis tells the truth, absent product fungibility the demand for fuel is inelastic – A Carbon Tax punishes marginal actors in society, beats up commodity producers like farmers, AND does nothing.

Click here for more on the Carbon Tax and the Environment

The Supreme Court of Canada gave direction on death with dignity (DWD) legislation, it was clear we have the constitutional right to direct the end of our lives as we see fit. By failing to allow for prior directives, and by placing the decision to execute in the hands of medical professionals (rather than in the hands of affected individuals), and failing to offer judicial process to oversee the wishes of individuals; the government has created a dangerous situation.

Finally, the Liberals (of Justin Trudeau) chose to raise the issue of gun control again.  Gun control has been a long-standing cultural differentiation tool the Liberals use to define us (Canada) as being different from them (US). They have incited an inaccurate perception of gun ownership and placed fear where none need exist. They once frittered away $2 billion on gun control and now they promise to waste more. It always has been and is again a complete red herring.

If you want greater sensitivity to western needs and concerns, greater fiscal responsibility and a rational approach to resourced development then vote Conservative.

The riding of Kamloops – Thompson – Cariboo is more important than it ever has been before. The way the numbers are shaping up, we could end up with a NDP, LIBERAL, GREEN co-operative entity of some sort -- I'll let that prospect affect you as it might.

We have seen it at work in BC and needlessly, resource development has all but come to a halt.

Mr. Thomson spent his youth in Vernon, BC, where he graduated from Okanagan College, and then participated in every major industry in the province, save commercial fishing. The greatest portion of his experience was gained in the construction, forestry, agriculture and tourism industries.