Yesterday we had two different accounts of BC’s economy – and of course they did not match up. From the BC NDP’s Finance Minister, Carole James, came these words:

“Today’s update from S & P Global Ratings shows that our plan to invest in people while balancing the budget is not only possible, but also fundamental to building a strong and sustainable economy”

“We have sustained responsible budget management and invested in our most valuable resource — the people who power our province”, she continued.

The governments media release, regarding S&P’s Global rating, went on to state that ... along with an expectation of operating surpluses, the government has an ambitious capital plan focused on investment in productive assets, such as transportation infrastructure, health facilities, and school replacement programs ...

Andrew Weaver’s BC Liberals however, were not so easily persuaded of good times ahead.  BC Liberal Finance Co-critics, Shirley Bond and Stephanie Cadieux, instead issued qualms ... after ratings agency Standard and Poor’s (S&P) threatened to downgrade BC’s AAA credit rating amid concerns about rising debt to revenue rates.

BC Liberals went on, stating that according to S&P ... British Columbia is not prepared to withstand any economic shocks or downturns should debt levels continue to rise.

Cadieux stated, “Unless John Horgan can come up with a plan to grow the economy and reduce debt then British Columbians better hold on to their wallets.”

So ... according to the BC NDP interpretation of the S & P Report ... “BC’s financial management practices remain very strong.”

While the BC Liberals understanding is ... “if fiscal slippage or other policy decisions cause this ratio to rise notably above current expected levels, it could begin to erode BC's resiliency to the next economic downturn.”

I for one will tend to side with the BC Liberals on this one.  The governments fiscal house, is one all should be concerned with. Rising debt means that interest on that debt is rising as well.

The updated Fiscal and Debt Summary of the BC government (June 30th, 2019) states that total taxpayer supported provincial debt is $71.32 BILLION dollars.

So, how is this debt being paid for?  Looking at that same BC governments Fiscal and Debt Summary, it indicates that taxpayer supported interest is 3.2 cents for every dollar of government revenue. 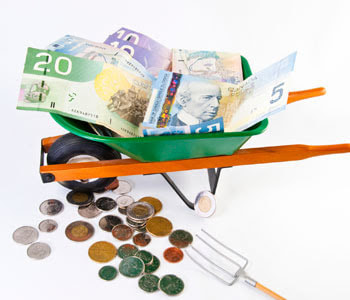 Given what the BC government, and the BC Liberals, are stating ... it would appear that our fiscal house is on a knife edge, and a downturn could tip us into a nightmare of cuts to core government services. And according the BC government, in an April Report to investors that the government was looking to provide them with financing, there are indeed risks to our fiscal well-being.

These risks, as outlined by the government, include:


... slower than expected global economic activity, particularly in Asia and other regions


... disruption to economic growth in Europe


...timing of investment and hiring related to the LNG Canada project


... stronger than expected impacts of past and future monetary policy tightening on interest rate sensitive sectors

These are serious concerns, not to be taken lightly – especially given repeated warnings of a possible upcoming recession.

Government spending has a direct cost to the people of BC, and the business community, therefore the government must be prudent with the financial resources we provide.

And those who continue to cry out for more and more government spending need to realize the approaching consequences if it does not end.

FOOTNOTE ... all political parties, in the current federal election, also seem hell-bent on what they are willing to offer to Canadians. And far too many are failing to realize the cost of these goodies will be borne by you and I. With ten days remaining until we vote, I can only cringe thinking of what still remains when it comes to upcoming announcements in what has become a spending frenzy.