… Ecojustice (has) asked the court to halt the $2.5 million Public Inquiry into Funding of Anti-Alberta Energy Campaigns, which it says was created for "partisan political purposes" …

"The inquiry has been called not to address a matter of pressing public interest, but to justify a predetermined intent to harm the reputations, economic viability, and freedom of expression of certain organizations who have opposed the Government of Alberta's position with respect to oil and gas development", the application from Ecojustice explained.

“Ecojustice alone has received US $815,000 from the US based Tides Foundation” ~~ Alberta Energy Minister Sonya Savage

It seems like the government of Alberta is playing hardball however – moving up from the minor leagues, to the majors, in fighting for the provinces resource sector, and the tens of thousands who have lost their jobs.

In response to the claims of Ecojustice, Alberta’s energy minister, Sonya Savage stated … for far too long there have been concerns about foreign-funded campaigns discrediting Alberta’s oil and gas jobs. As minister, I’m committed to uncovering the truth and working to revitalize the energy sector.

Speaking yesterday, Savage reminded those supporting the provinces resource industry, and those opposed that … “Our government was elected on the promise to launch a public inquiry into the foreign sources of funds behind the anti-Alberta energy campaigns. This inquiry is long overdue and will examine if, how and why foreign funding has contributed to landlocking our energy sector”.

She then continued, “Ecojustice alone has received US$815,000 from the U.S.-based Tides Foundation. Ecojustice has been one of the leading activist groups seeking to block the duly approved Trans Mountain Pipeline Expansion Project. Ecojustice’s opposition to the inquiry into the foreign-funded attacks on our oil and gas workers speaks for itself”.

Again, quoting the CBC news story, the application from Ecojustice says public comments made by the United Conservative Party, Premier Kenney, and Justice Minister Doug Schweitzer show the inquiry was not designed for independent fact-finding … and instead … the inquiry has been called for an "improper purpose"  … and that … Alberta's lieutenant-governor did not have the authority to order it.

Savage fired back however indicating:

“The inquiry is fully independent, as per the Public Inquiries Act and commissioner Steve Allan’s terms of reference and engagement letter. I won’t prejudge any results from commissioner Allan, as his work is ongoing. Our government is looking forward to receiving a completed report from the commissioner no later than July 2, 2020.” 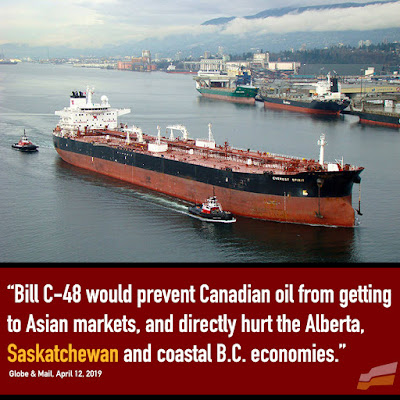 Alberta’s newfound tough stance, towards those who would continue to make things difficult for its resource sector, is likely a welcome relief to residents.
How far it will go in making change however, is yet to be seen. Quebec and eastern Canada, along with Prime Minister Justin Trudeau, are yet to show signs of understanding the plight of many in the province.

Additionally, there appears to be no changes, on the horizon, for the outright standing down of Bill C48, known by many as the BC west coast anti-tanker ban … nor Bill C69, which many having called legislation to outright kill any future pipelines.

The result is we may see things ramp up even more, as the province of Alberta insists on getting what it sees as an equal place amongst confederation, and freedom from never ending hits to pipeline expansion.