FELDSTED - The Conservative mandarins believe they can hire specialists to package a leader and run an election campaign. They have been proven wrong twice in a row


We are still wondering how the Conservative Party of Canada (CPC) managed to lose the October election. It seems we were even more inept than our opponents.

Many of us underestimate the impact of abortion and gay rights protection; both are highly charged, emotional issues. Being pro-abortion and pro-gay is “in”. Conservative leader Andrew Sheer was indecisive, which is considered dangerous by those who motivated by emotion. A 5% swing in undecided votes is deadly in a first past the post system. 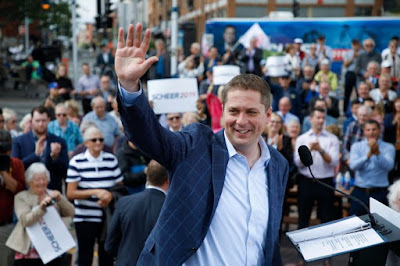 Scheer’s campaign people and advisors should all be dismissed. In the critical period from the beginning of May to the end of August, Scheer was a ghost with no media presence. No one knew what he stood for. No policies were articulated. The CPC was a cipher.

Scheer failed to “brand” the Conservative Party as his. That led to criticisms that the CPC was still Harper-era, and that Scheer was a reincarnation of Harper. Scheer needed to brand the Conservatives as his in mid-May, so MPs and candidates had a plan for the summer BBQ circuit.

The team wasted the summer visiting the converted. CPC members got a better look at Scheer and he was impressive. However, the people he needed to impress were the vast audience of the undecided. He needed public rallies that depended on the branding that did not happen.

He did not present a “Scheer Conservative Party” which lead to “Joe Who?” questions that were entirely predictable and just as hurtful as they were to Clark.


The team strategy was to have Scheer open late in the campaign and adopt a father figure, prime ministerial stance that oozed confidence and capability. That would have worked in May. By September the opposition parties had branded Scheer in the public arena. He was on the defensive and the campaign sputtered to a halt.

It’s been over 5 weeks since the election, and most are still unsure of who Andrew Scheer is, and what he stands for. That tells us much about incompetence of the people advising him.

You cannot primp, package and sell a political leader. That only happens in the movies. You must analyze the leader, discover his or her strengths and passions and build your campaign around that. Then you are promoting the ‘real thing’ and will get real results.

Scheer’s ever-present smile and dimples preclude presenting him as “prime ministerial”. He looks like what he is; an intelligent, affable, approachable leader with a passion and plan for Canada. The Conservative mandarins believe they can hire specialists to package a leader and run an election campaign. They have been proven wrong twice in a row.

The problem is far greater than Scheer; the CPC mandarins need to be tossed and replaced.

If Scheer engineers a palace coup d’état in April, he can lead the Conservative Party to victory when the minority is defeated. More than that, the show of strength will enhance his standing in Parliament and make alliances much easier to make.

If he does not, neither Scheer nor a replacement can overcome the inertia of an out of touch, irrelevant party executive. That is the real albatross Peter MacKay spoke of; the unelected, paid mandarins and party officials who scurry down the dark passages of the CPC Party HQ dispensing advice ... but immune from accountability.

They have failed us and must be replaced.