Forest Minister Doug Donaldson has spent a great deal of time stating they can’t change our stumpage system. I call BS because the ministry is currently, quietly working on a change

The new cut announcement was made necessary in response to the end of the mountain pine beetle epidemic and salvage of dead pine in the Lakes Timber Supply Area (TSA), much as has happened in other areas of the province.

The BC Forests Minister, Doug Donaldson, has spent a great deal of time stating that they can’t change our stumpage system. I call BS because the ministry is currently, quietly, working on a change ~~ MLA John Rustad

I asked Nechako Lakes MLA John Rustad what the new AAC would mean for the area, and he indicated, “Two issues are at play from what I have heard”.

“The amount of logging over the past two years has been down due to wildfires ... and the forestry crisis. The Lakes District Timber Supply Area (TSA) has several operators in it”.

"Hampton Forest Products has two mills with a total processing capacity of about 800,000 m3, while Fraser Lake sawmills has (going from memory) a licence for about 300,000 m3. Canfor also has a cut in the Timber Supply Area. Additionally, Tahtsa and L+M Lumber also have cuts”. Rustad stated, and then continued.

“All of this was before the new Community Forests ... and of course, the new Annual Allowable Cut (AAC) determination”.

With numerous mills through-out the province cutting shift, or implementing outright closures, I asked what he thought would be the impact on mills in the area, and number of workers that will be needed, with lower allowable cut? How similar is this to other areas if the province?

Rustad responded saying, “My hope is that the local mills will have enough fibre from this, from community forests and from other tenures (woodlots, First Nation allocation, etc.) to keep operating. There will certainly be enough fibre to support the local operations but what will the impact be to the others? This is why the allocation is critical and until that is done, companies will continue to harvest based on their previous allocation”. 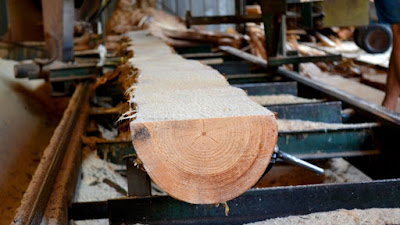 And as to how similar was this to other areas of the province, he indicated to me, “In the Prince George Timber Supply Area, for example, the cut has been reduced from 11.5 million m3 to 8.4 million m3 but the allocation has NOT been done. Therefore, companies can still potentially harvest at the higher rate. This has been going on for more than 2 years”.

As for closures, shift reductions, and short-term layoffs, examples of which were Tolko now announcing a two-week closure of all BC mills over Christmas and New Years ... as will as Saturday announcement that its Soda Creek Mill will now be going to a three-day work week ...

“The Tolko situation is not a surprise. I suspect there will be more curtailment announcements in the coming weeks as most (if not all) companies are still losing money in the current situation. The crisis in the forest industry will not stop until BC’s costs come down”.

The Nechako Lake Liberal MLA then continued, “The BC Forests Minister, Doug Donaldson has spent a great deal of time stating that they can’t change our stumpage system. I call BS because the ministry is currently, quietly working on a change”.

“What is really going on is pure incompetence by this minister, and this government. They have ignored the pain being suffered by workers, families and communities because they have no clue what they are doing”, he concluded.