Encana’s gone. As have thousands of jobs and billions of dollars of investment capital in Alberta over the past decade.

And with a minority Liberal government in Ottawa, it feels like things can only get worse – not only on the energy file, but for all of Canada.

Stewart Muir, Executive Director of Vancouver-based Resource Works,  posted last week this must-read piece on what the federal election means for energy and unity in Canada. Here’s what he says the Liberal resource sector policies, including C69 and C48, have done so far:

“We know for a fact that in 2018 alone, 37 major projects worth $77 billion were cancelled in Canada. The CEO of Enbridge recently stated that more than $30 billion in investment has been lost due to major pipeline projects being cancelled or stalled. The University of Calgary’s School of Public Policy said that pipeline capacity constraints mean $14 billion a year in lost revenue per year”.

“Today, hundreds of thousands of Canadians in the oil and gas sector remain unemployed, or underemployed. The effects ripple through the economy. We are at an inflection point for Canada. The one thing that Canadians should demand until they are blue in the face is for all government decisions to be anchored in terms of growth in the nation’s economic prosperity in real terms”.

Stewart nails it ... Canada indeed is at an inflection point. The rising separatist tide in the West is pooh-poohed by the café latte crowd in Victoria, as well as on Yonge Street in Toronto and on Rue Sainte-Catherine in Montreal.

They are mistaken to underestimate this tinderbox of anger and frustration.

Is separatism really the best alternative for the West, for our resource sector, and for Canada? Isn’t there another way to get through this? We’re about to find out.

We believe it’s time for resource sector supporters to hit the road. Time to get out of the bubble in Alberta where nearly everyone thinks like we do. It’s time to meet face-to-face with Canadians who have different views. Or who don’t understand why the West is so upset.

It’s time we carried your voice across Canada – in person. Face-to-face with people who are helping chart Canada’s future. Frank, open and honest talks.

Our goal? To listen, to learn, and to passionately defend Canada’s resource sector.

We hope to find ideas that all of us can get behind that will help local, provincial and federal politicians across Canada make smart, informed decisions on the resource sector in the years ahead.

We will demand, as Stewart Muir writes above, that government decisions at all levels be “anchored in terms of growth in the nation’s economic prosperity in real terms”. No kidding.

There’s nothing to lose - except the future of our resource sector – and maybe even our country.

Suits and Boots is perfectly fitted for this role. We helped lead the fight on Bill C-69. Let’s step up again and see if we can help on this issue. A national, grassroots and self-funded group like ours has a leadership role to take. Especially at a time where the fabric of national unity is frayed to the breaking point.

More than ever, your voice needs to be heard. It will be. Starting right off the top in BC, Ontario and Quebec and then back to Calgary. 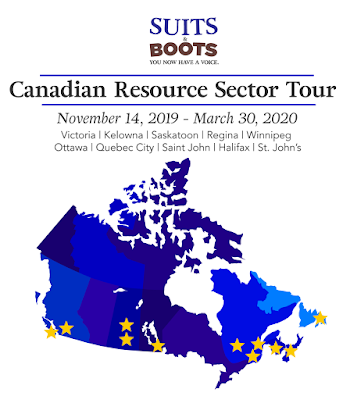 On Thursday, November 14th, we’ll be in Vancouver holding the first of several meetings across Canada. We’ll meet face-to-face with leaders and activists from First Nations, environmental, business, academic, youth, resource sector and capital markets groups. We’ll then be in Toronto on Wednesday, November 20th, in Montreal on Friday, November 22nd, and in Calgary on Tuesday, December 10th.

On Tuesday, December 17th, we’ll deliver to you our summary and conclusions on what we hear in our first three meetings, and what we’ve learned.

If we think we’re moving the needle, and with your support, then we’ll hit the road again in the New Year. We’ll do this again in Victoria, Kelowna, Saskatoon, Regina, Winnipeg, Ottawa, Quebec City, Saint John, Halifax, and St. John’s.

We will wrap up our tour on March 30, 2020. We will be in Toronto in April when the federal Conservative Party meets for its convention and leadership review.  What a perfect time to present our conclusions and our ideas to a Party that clearly needs to expand buy-in for its resource sector policies outside of the West.

Stay tuned for our schedule details, for our agenda, and for a list of who we’re meeting with. You’ll be surprised and impressed. Face-to-face chats, with your voice being heard loud and clear.

Suits and Boots is bringing you to your seat at the table in this discussion of national importance.

Thank you for your interest and support.