Policies matter, and when the oil and gas sector is very clearly indicating that American jurisdictions are more attractive for investment, policymakers should take note 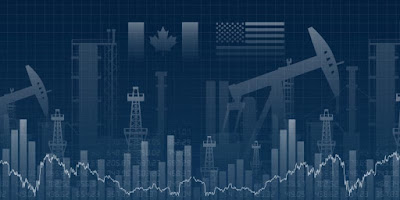 Texas is more than two times as attractive than Alberta for oil and gas investment, according to a new survey of petroleum-sector executives released today by the Fraser Institute, an independent, non-partisan, Canadian public policy think-tank.

“Canada’s onerous and uncertain regulations, along with our dearth of pipeline capacity has created a competitiveness chasm between Canada and the United States—particularly between Alberta and Texas,” said Ashley Stedman, senior policy analyst at the Fraser Institute and co-author of the Canada-US Energy Sector Competitiveness Survey.

The survey, conducted between May and August of this year, ranks 20 North American jurisdictions (15 states and five provinces) based on policies affecting oil and gas investment.

This year, Texas ranked 1st while Alberta ranked 16th out of 20. Specifically, 80 per cent of survey respondents cited uncertain environmental regulations as a deterrent to investing in Alberta, compared to only nine per cent for Texas.

Likewise, 65 per cent of respondents identified regulatory duplication and inconsistencies as a deterrent to investing in Alberta compared to eight per cent for Texas.

Rounding out the top five most attractive jurisdictions for oil and gas investment are Oklahoma (2nd), Kansas (3rd), Wyoming (4th) and the US-Gulf of Mexico region (5th). 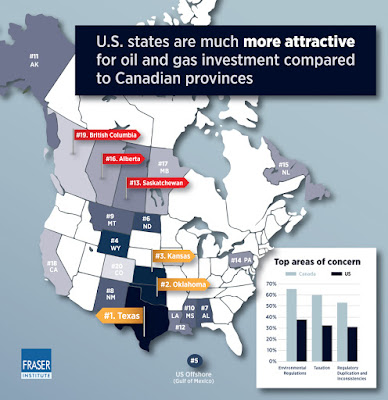 Among the survey’s 20 jurisdictions, Saskatchewan (13th) was the most attractive Canadian province followed by Newfoundland and Labrador (15), Manitoba (17th) and British Columbia (19th). Colorado (20th) was the least-attractive jurisdiction.

“Policies matter, and when the oil and gas sector is very clearly indicating that American jurisdictions are more attractive for investment, policymakers should take note,” said Kenneth Green, resident scholar and chair of energy and natural resource studies at the Fraser Institute.