Nominations are being accepted for the Order of British Columbia, the Province’s highest honour.

The award is extended to those British Columbians who have demonstrated outstanding achievement, excellence or distinction in a field of endeavour benefiting people in the province or elsewhere. 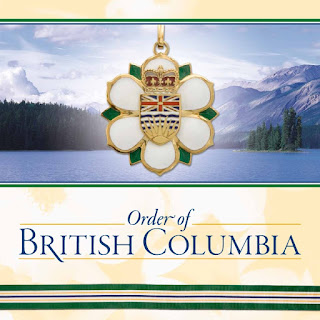 British Columbians are encouraged to nominate inspiring individuals who have left a lasting legacy in their respective fields. The Order of British Columbia is one way of rewarding and recognizing those British Columbians whose extraordinary contributions and achievements have benefited BC and beyond.

“Outstanding contributions to our province and our quality of life should be recognized and honoured,” said Janet Austin, B.C.’s lieutenant governor and head of the Order of British Columbia. “If you know someone who inspires you because of their leadership and extraordinary accomplishments, nominate them.”

Nominations will be reviewed by an independent advisory council, chaired by the chief justice of British Columbia. To be considered, nominations and letters of support for the Order of British Columbia must be received by March 6, 2020, at the Honours and Awards Secretariat office: bchonoursandawards@gov.bc.ca

“It's important to celebrate the passion, dedication and contribution of BC’s exceptional citizens, like the amazing John Mann, who sadly passed away earlier this week,” said Premier John Horgan.

“John was a person whose contributions to the arts and to charitable causes benefited not only the people of BC and Canada, but people around the world. He received the order in 2016. I encourage British Columbians to submit nominations of people they know who have gone above and beyond for the benefit of others.”

As well as the Order of BC, people may nominate individuals for the Province’s other honour – the Medal of Good Citizenship. The medal recognizes citizens for their exceptional long-term service and contributions to their communities without expectation of remuneration or reward.

The medal reflects their generosity, service, acts of selflessness and contributions to community life. Nominations for the Medal of Good Citizenship are accepted year-round.