Monetary policy has always been a panacea for ailing economies, rarely more than during the financial crisis of 2007-08.

It’s a simple concept: lower the cost of borrowing for consumers and businesses and you stimulate the economy and, as a side effect, inflation. 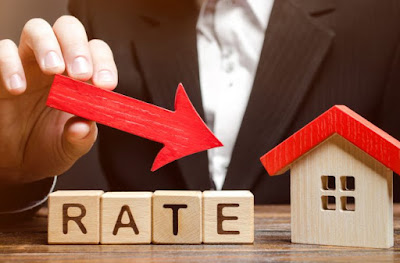 Monetary policy easing was used heavily following the financial crisis 10 years ago by countries around the world, including the U.S. and to a lower extent Canada.

The textbook cautionary tale of interest rate easing, however, is Japan, which dropped its interest rates to near-zero in the early 1990s, where they have since remained for two decades and counting.

Some are now starting to question whether low interest rates are as effective as they once were to stimulate economic growth, saying central banks no longer have the same ability to control inflation, spending and employment through traditional means as they once did.

That argument was made in a paper by Harvard’s Larry Summers (Former U.S. Treasury Secretary) and Anna Stansbury, a PhD candidate in Economics at Harvard University. Going against knowledge that we’ve taken for granted for decades, they argue that instead of stimulating growth, rock-bottom interest rates may in fact become a drag on an economy.

Or at least, “not nearly as powerful a lift as once thought,” wrote Avery Shenfeld and Royce Mendes of CIBC Capital Markets.

“If that view takes hold, it will have major ramifications for both policy-makers and investors,” they say. “The experience in this cycle suggests that monetary policy might well be doing more harm than good in places like Germany and Japan.”

They say the evidence doesn’t point to that being the case in Canada yet, though there could be reason to believe low-rate monetary policy is having less influence on stimulating growth and inflation as it once did.

They argue that, while lower rates do reduce the hurdle for business investment spending, “this link would be weaker than in the past, owing to the lesser economic role played by capital intensive heavy industry.”

They add, “With a given rate cut levering up a smaller response from businesses, we can get caught in a trap in which ever lower rates are needed at the bottom of each economic cycle, eventually hitting a wall at wherever the lower bound on rates lies.”

Interest rate cuts are proving to have less of a boost on consumer and household spending as well.

But they also point to the “income effect,” which works in an opposite way. The idea is that lower interest rates reduce one’s “lifetime consumption path” given the weaker stream of income that can be expected from your retirement savings.

“Households in their prime income and savings years might opt to increase savings (and reduce spending) when rates fall, in order to make up for that hit to retirement incomes,” they write. 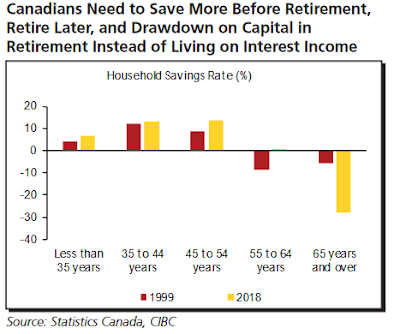 This would explain the increased savings rate being seen among Canadians under the age of 65.

And even if lower rates did encourage increased spending on housing and durable goods, Shenfeld and Mendes note that those who took advantage of low rates when they first fell to historic lows might be less inclined to take advantage again in a second low-rate cycle.

“An ‘on sale’ sign will only bring the customers into the store for so long before they’ve fully tapped into what you’re discounting, particularly for durable goods and housing,” they wrote.

They also point out there is now a rising share of Canadians who are moving past the life-cycle stage where the most borrowing and consumption takes place, which is up to the age of 55.

Is This Holding the Bank of Canada Back from Cutting Rates?

“… rate cuts just aren’t having as much impact anymore,” he wrote recently. “They are supposed to provide economic stimulus, but their boost has been dulled by years of ultra-low interest rates and bloated debt levels that have already brought forward a lot of future demand.”

Despite central banks around the world—including the US Federal Reserve —lowering rates to get ahead of a slowing global economy threatened by escalating trade wars, the Bank of Canada has remained somewhat defiant, holding its key lending rate steady at 1.75% for over a year.

“If the BoC is worried that additional rate cuts would reduce its future leverage, and if it also believes that rate cuts have lost much of their stimulative power in the current environment, it may decide to hold its policy rate steady for longer than it otherwise would,” Larock added.

A Warning for the Next Downturn

While Canada hasn’t entered the same drag in spending that’s been seen in places like Germany and Japan, Shenfeld and Mendes say the longer ultra-low rates persist, the greater the threat becomes as more households bulk up their savings to compensate for the low interest they can be expected to earn.

“Add it all up, and while low rates helped in the rescue of the Canadian economy in the last recession, they might work less well in the next downturn,” they wrote.

They also say we need to learn from the Eurozone’s poor response to ultra-low rates.

“If we do, today’s long-term rates, which likely price in some probability of periods of near-zero rates in Canada, could be too low if economists start to more broadly question the wisdom of ultra-low policy rates.”

AUTHOR ... Steve Huebl is a graduate of Ryerson University's School of Journalism and has been with Canadian Mortgage Trends and reporting on the mortgage industry since 2009. His past work experience includes The Toronto Star, The Calgary Herald, the Sarnia Observer and Canadian Economic Press. Born and raised in Toronto, he now calls Montreal home.