ADAM OLSEN – Millions of dollars have been spent to build roads and move mountains of debris, all in a heroic effort to save wild salmon

Since my election to the British Columbia legislature in May 2017, I have been a champion for wild salmon.

As I have written often in the pages of this blog, the salmon are not only an important symbol of the abundance of our province, their work of transporting nutrients from the Pacific Ocean back home gives life to all other wildlife in our creeks, streams, rivers, and forests. Salmon are truly one of the great wonders of the world.

In early 2019, the provincial and federal governments learned of a landslide at Big Bar, in the Fraser River north of Lillooet, BC. The landslide has had a dramatic impact on BC’s iconic salmon runs. It is just one of many human-caused and natural challenges facing wild Pacific salmon.

Landslides on the Fraser are not new. I have heard the ancient stories of how disruptions upriver affected the salmon returns for the W̱SÁNEĆ reef net fishing families in the Salish Sea. 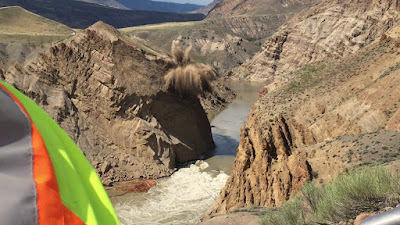 Landslides of the past have been survivable, but now wild salmon must contend with a host of other troubles.

In addition to the house-sized boulders at Big Bar producing a wall of fast moving water -- making the river nearly impassable even for all but the fiercest swimmers -- salmon face over-heated tributaries from poor logging practices, and a massive nutrient-depleted warm blob off the British Columbia coast (which is) super-charged by a rapidly warming climate.

Historically, a landslide of the scale and scope of the one at Big Bar would have been devastating, but would have hardly doomed salmon species to extinction. Unfortunately, that is exactly how the experts are characterizing our current situation.

The federal Department of Fisheries and Oceans optimistically predicted 4.5 million Pacific salmon would return in 2019 ...instead only slightly more than 600,000 made it home.


From the human response to the slide, we learned that it is possible to for the government to find resources, inspiration and motivation to act. I believe that the all-hands-on-deck approach is largely due to an innately human desire to conquer nature.

The situation at Big Bar is a thrilling “human vs. nature” scenario.

Millions of dollars have been spent. Government agencies are working together in lock-step to build roads and move mountains of debris, all in a heroic effort to save wild salmon. 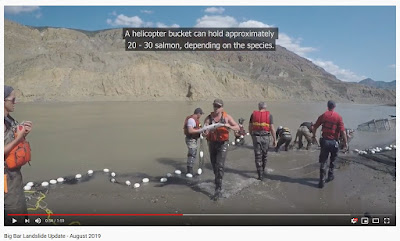 It’s a rescue and recovery effort for which we will expend whatever resources necessary. However, when it comes to showing restraint on the human activities that are adding to the existential threats to wild Pacific salmon, we hear about how it someone else’s problem and that the social, environmental and economic costs are far too great to overcome.

I am thankful that the provincial and federal governments have invested $140 million in Pacific salmon research, innovation and habitat. I’m grateful they have found a way to pull multiple agencies together, and find many millions of dollars, to try and solve the massive problem at Big Bar.

With all we know about the importance of salmon to the health and well-being of our province, today and for future generations, governments at all levels, need to respond with the same sense of urgency to the human-caused crisis’ facing salmon as we do for the ones caused by nature.