DAN ALBAS -- What is the one issue that you most want to see referenced in this week’s Throne Speech as a priority of the Federal Government? 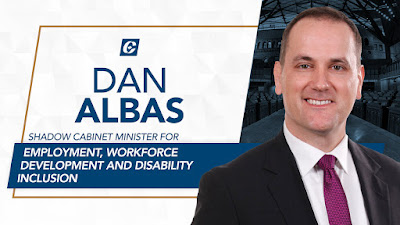 Finally, Members of Parliament have returned to Ottawa.

For members of the Opposition it also a time to become familiar with what our critic roles will be to kick off this new parliament.

I am pleased to announce that the entire Okanagan region will be well represented with prominent critic roles:

My new portfolio will be the Conservative critic of Employment, Workforce Development and Disability Inclusion.

As critics, it is part of our job to hold the government to account.


It is also our responsibility to not just oppose but also to propose policy and solutions that we believe can be of benefit to the citizens that we are elected to serve.

The Governor General will deliver the Prime Minister's Throne Speech outlining the priorities of the Liberal minority government in the upcoming Parliament.


This leads me to my question this week.

What is the one issue that you most want to see referenced in this week’s Throne Speech as a priority of the Federal Government?

Dan Albas is the Conservative Member of Parliament for the riding of Central Okanagan-Similkameen-Nicola.