FELDSTED -- When political parties engage in all out war, the people they claim to serve are left in the cold


American legislators tend to get rather full of themselves, and media reports are inconsistent and erroneous. The US House of Representatives (Congress) can’t remove a president from office. 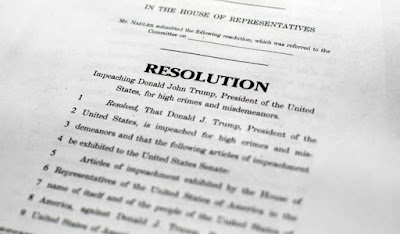 The term ‘impeachment’ as used in the US constitution refers to the process of Congress, having held hearings and examined evidence, recommending that charges against a government official, including the President, be sent to the Senate acting as a properly constituted court.

The Senate will consider the charges and evidence presented by Congress but may call more witnesses and additional evidence if it so desires. The entire Senate is the jury and eventually Senators will vote on whether President Donald Trump should be removed from office. Removal from office requires a two-thirds majority vote of Senators present.

That seems unfair to anyone subjected to the impeachment process as a lack of rules precludes the protections of the principles of natural justice -- in effect in any civil or criminal proceeding -- such as full disclosure and disallowing hearsay evidence.

Congress, acting as a crown prosecutor, must be impartial in its deliberations. Each Member of the Congress must weigh allowable evidence on its merits and vote accordingly. There can be no “voting along (political) party lines” or the process is tainted. Either there is evidence to support articles of impeachment or there is not.

There is no grey area.


“Impeached” is the equivalent of being “charged” for doing something inappropriate to the office of a public official or failing to take appropriate action. The premise is that every elected or appointed official is bound to act ethically and honestly in all matters. That is a very wide net open to broad interpretation.

The impeachment proceedings have consisted of almost three years of hype, hyperbole and high drama. The Senate trial, which will be presided over by the US Supreme Court Chief Justice, will be less dramatic and focused on the business at hand. When the charges have been heard, evidence reviewed and witnesses heard, the Senate will deliberate behind closed doors, vote and announce a verdict.

The Senate trial will seem pale in comparison to the impeachment process. Most people will not notice as they will be caught up in the parallel media trial as high drama sells newspapers and attracts TV viewers. The media will continue the impeachment process during the trial period because the media is as politically biased as the legislative arm of government. Neither side will take prisoners which is an affront to democracy.

The impeachment process has been sucking up all the oxygen in Congress for many months, leaving little time for legislative matters. That is not in the best interests of the American people and highlights the dangers of highly partisan politics.

When political parties engage in all out war, the people they claim to serve are left in the cold.