FORSETH: It shows, once again, that political parties are run by a select few at the top, with little influence by rank and file members


Regrettably, at least in my opinion, a hatchet job was done on Andrew Scheer, to force him from his role as leader of Conservative Party of Canada. 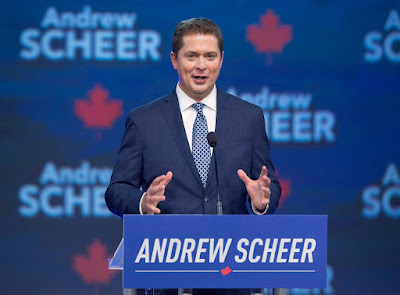 I too, like many others, was disappointed at the results of Octobers federal election, and I also believed that those who were in charge of the direction and tone of the campaign, did a poor job of forming a response to questions of Scheer’s personal beliefs, versus those the party would govern by if elected.

Yes, I know it’s easy to be an armchair quarterback,, but the results of the campaign speak for themselves – another term for the Liberals for as long as their minority government lasts.

The fact that underhanded maneuvering, by some at the top, forced Andrew Scheer to set in place a new leadership campaign is, to say the least, disappointing.

It shows, once again, that political parties are run by a select few at the top, with little influence by rank and file members. Regardless, the die has been cast, and this is where things now sit for the Conservatives.

In a message to party members this morning, about the up-coming leadership election, Andrew Scheer stated;


As our party begins to embark on this exciting opportunity, electing a new leader, my only ask to my fellow Conservatives is this: we must stay united.

Only by staying united can we deliver a strong Conservative majority government that can unite our country and make life better for all Canadians, for the oil worker out of a job, for the senior who is choosing between heating and eating, and for Canada’s position on the world stage.

And in a class act, he also noted;

Whoever the hundreds of thousands of Conservatives across this country choose to lead our party into the next election, that person will have my 100 percent support.

Let the race begin, and let the people who wish to lead the party truly express, and articulate, their vision for the future of the Conservatives.

I know it’s a long-shot it would ever happen, however, please ... Please ... PLEASE ... can we end any further talk of Christy Clark as a potential leader!

Thousands, myself included, will tear up our membership cards, in disgust, should she ever run and win!