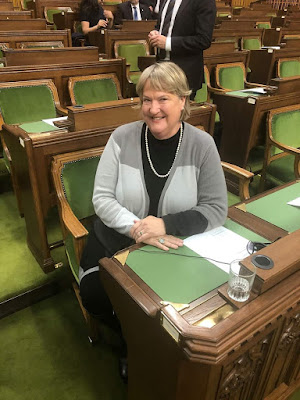 Ottawa: Cathy McLeod, Official Opposition Shadow Minister for Natural Resources, during today’s first Question Period asked the government about their plan to get forestry workers in British Columbia back to work.

Mr. Speaker, the B.C. forestry industry is in crisis. Thousands have been laid off and more job loss is expected before the holidays. The Speech from the Throne yesterday failed to mention that the Liberals will not even acknowledge a crisis exists. The government failed to negotiate a softwood lumber agreement, and the Prime Minister's antics at NATO may have destroyed any opportunity to get a deal done. What is their plan to get forestry workers in B.C. back to work?

“The Prime Minister (Justin Trudeau) didn’t give the courtesy of a response and left it to the Deputy Prime Minister, who struggled through an answer to my question,” said McLeod. “They have proven once again to fail forestry workers. There was no mention of immediate action or a detailed plan, with concrete deadlines.”

“In the coming weeks I will be calling on the government to prioritize the negotiation of a new softwood lumber agreement in order to prevent more job losses in this key sector.  In addition, they must immediately develop an action plan to support industry, workers and communities”.

“The forestry sector in Canada employed close to 209,900 people and generated roughly $24.6 billion of economic activity in 2017.  It is a vital sector that requires urgent attention,” concluded McLeod.