Since 2007 / 08, the year before the last recession, combined federal and provincial debt has grown from $837.0 billion to a projected $1.5 trillion in 2019/20, finds a new study released today by the Fraser Institute, an independent, non-partisan Canadian public policy think-tank. 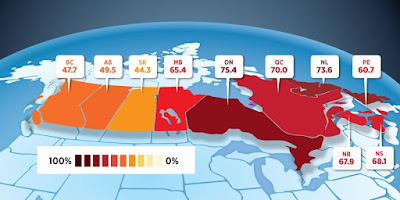 “Government debt — federally and in every province—has grown over the past 12 years, creating serious fiscal challenges for Ottawa and many provincial governments,” said Jake Fuss, economist at the Fraser Institute and co-author of The Growing Debt Burden for Canadians.

The study also finds that in 2019 / 20, Canada’s projected combined government debt (again, the federal debt and the provincial debt of all 10 provinces) will equal 64.3 percent of the Canadian economy.

Interest payments are a major consequence of debt accumulation. Governments must make interest payments on their debt similar to households that must pay interest on borrowing related to mortgages, vehicles, or credit card spending.

Revenues directed towards interest payments mean that there is less money available for tax cuts or government programs such as health care, education, and social services.