DAN ALBAS -- To add insult to injury, no specific reasons have been provided to justify what was clearly an arbitrary decision made by this agency


In the spirit of the holiday season this I have decided to share a tale of two different Cabinet Ministers from my time as a Member of Parliament representing the concerns of local citizens here in the riding.

In my first year as a Member of Parliament, a man who was a citizen from another country and had a permit to live and work in Canada, decided to take a weekend trip to visit the United States, a common activity for those who live near the border.

Upon return to the Canadian border, the man in question experienced an unfortunate incident where he was ordered to be removed from Canada within seven days.

The removal order was based on claims that the man was not legally in Canada to begin with.

This occurred despite legal documents the man possessed that clearly indicated this was not the case. It was evident that a mistake had been made but the wheels of Ottawa bureaucracy turn very slowly.

This issue in question was brought to my attention by a local MLA who reached out and advocated on behalf of the man, requesting he be allowed to stay according to the terms of his original admissibility documents.

Fortunately, the Minister of Immigration (at the time) was willing to hear the details of the case and ultimately corrected the error and restored faith in the fairness of our administrative process.

I respect this Minister, who is no longer a MP, to this day for demonstrating the leadership necessary to right a wrong that could have easily been buried behind bureaucracy.

On a different note, more recently I was approached by a small business owner from the Okanagan.

This small business owner has been successfully importing goods for resale worldwide for close to two decades.

Over that time frame this business now employs over a dozen people full time and has invested significantly in a local Okanagan community.

Recently, and without warning, a federal agency refused entry to a shipment of goods destined for this small business.

These were the same goods imported to Canada for close to 20 years without incident.


To add insult to injury, no specific reasons have been provided to the small business to justify what was clearly an arbitrary decision made by this agency.

These unaccountable bureaucrats have refused to assist in any meaningful way to produce a solution or even a course of action to resolve whatever issue is ultimately at play.

They have stated that the products are not in compliance, yet will not offer any forward guidance as to which rules are being broken or how they can be brought into compliance, citing that it is the job of the small business and not the department in question.

This attitude stands diametrically opposed to the Government’s rhetoric of encouraging small businesses to expand and export.

From my perspective, this is the type of situation that gives government bureaucracy a bad name.

I took this issue directly to the Minister in question who sadly has sided with the department and will not offer any useful assistance.

This small business owner faces the potential of losing a significant amount of money that was  invested in the inventory that was paid for prior to shipping.

There was a solution here.

Considering the same goods have entered Canada for close to two decades, this shipment could have been released with a directive that it would be the final shipment unless whatever corrective action deemed necessary is identified and undertaken.

In the absence of that the local small business suffers. 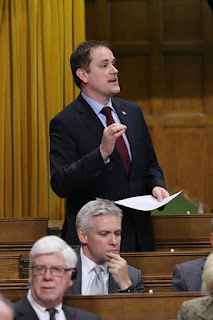 I will not be identifying either Minister referenced in my report today but share this with you to ask one simple question ...

To what degree of importance do you believe a Cabinet Minister has a duty to be accountable to the citizens of Canada they serve?

I would like to wish you all a healthy and prosperous New Year in 2020.

Dan Albas is the Conservative Member of Parliament for the riding of Central Okanagan – Similkameen – Nicola.  He is currently the Shadow Minister for Employment, Workforce Development and Disability Inclusion.