DAY 9 … ‘20 for 2020’. Bids submitted to build future ferries will include not just the lowest submission that meets structural requirements, but will also include the financial benefits of building in BC


Welcome to day number nine of “20 for 2020”.  If you’re just joining us, for the first time today, we are now over a third of the way through a series of ideas which I believe any government committed to the well-being of its citizens, should be in full agreement with implementing. 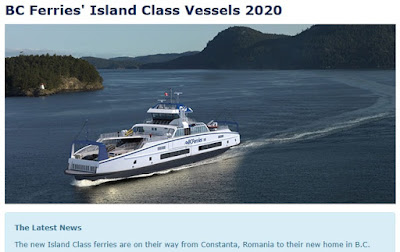 To be honest, I am unsure as to what goes into determining where ships will be built, outside of meeting the requirements put forward by BC Ferries for what is needed structurally, and likely the lowest bid that meets those requirements. I did ask a couple of government officials whether the following was part of the governments determinations on whether to build in BC, however they were unsure as well.

With that in mind then, and knowing that BC Ferries is a semi-autonomous entity owned by the provincial government, here is number nine:

A review of bids submitted to build any future ferries (Request for Proposals) will include not just the lowest submission that meets requirements, but will also include the financial benefits of building in British Columbia.  These will include the number of jobs created, taxes and revenues generated from them, the benefits of additional manufacturing which would be done in BC, new company starts, monies generated to the government from spin-off jobs, as well as any and all additional financial benefits.

YES … I know we had the Fast-Cat scandal in the late 90's under the NDP government of Premier Glen Clark … AND YES, we now have the current NDP governments much criticized Community Benefits Agreement program.

Given both of those things, this would have to be structured to be at arms length from the government so as to avoid political interference.  I think that a discussion with the provinces Auditor General would be a good start on how that could be implemented.

That's it for today.  Just a reminder that if you have missed any of the previous ideas and suggestions, from “20 for 2020”, you can catch up at the following links:

#1 … those who wish to lead, should acknowledge that government must be about people.


#2 … a review of services provided to areas and regions where much of the provinces revenues are collected from.


#3 … there should be a full review of all license costs and fees, which the provincial government has imposed upon us, to see where and how they are being used


#4 ... we need a permanent fix to the problem of keeping medical practitioners in some of the more rural areas of the province


#5 ... put an immediate end to the Community Benefits Agreement


#6 ... the next BC government must be committed to sustainable resource development


#7 ... government should make treatment for chronic conditions free to residents

We're back tomorrow with number 10 -- the mid-way point -- hope you'll join us then.