FELDSTED – Posturing doesn’t change the facts faced by families other than to raise hopes of compensation that may take years, or may not materialize


A ‘furious’ Justin Trudeau says Iran must conduct an open investigation into downing of Ukrainian jet ... this from a Prime Minister who stonewalled investigations into the SNC-Lavalin and Vice-Admiral Norman affairs! 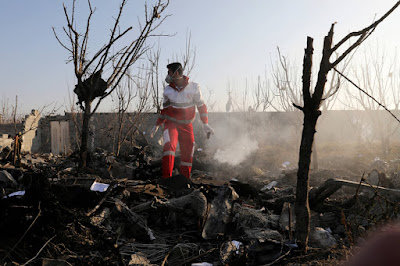 The usual aircraft crash investigation is an exercise in futility. Iran has admitted to ‘mistakenly’ shooting down the aircraft with surface to air missiles. Painstakingly sorting through the debris to establish the cause of the crash is wasted time and effort.

How the ‘mistake’ was made is an Iranian affair, and the Prime Minister is dreaming if he thinks outside observers will be invited to participate in an internal military investigation.

There are treaties for compensation for crash victims of international airlines where the airline is found at fault but that would not apply in this case. The civil aviation act prohibits member nations from shooting down a civilian aircraft but does not address the compensation issue.

The families of victims have few legal recourses. Apparently, the Ukraine and Iran are engaged in negotiations for compensation for victim’s families.

Canada’s posturing on the issue does not change the facts faced by victim’s families other than to raise false hopes of compensation that may take years or may not materialize.

The notion that compensation will ease the sense of loss and grief overwhelming victim’s families, friends and loved ones is cynical. Each of us processes the sudden and unexpected loss of a loved one differently.

There is no magic elixir that can deal with lives turned topsy-turvy in an instant.

Grief shared is a temporary balm for those left bewildered, but then come months of rebuilding lives in a new and vastly different reality.

Canada needs to tone down the rhetoric, and focus on immediate needs of families ... such as assistance in identifying bodies and arranging for Canadian victims to be returned to their families as quickly as possible.

We don’t know what forensic facilities Iran has, and we have expertise that can help. DNA matching is complex but may be the only way to identify victims of a fiery crash; victim identification may require multi-national cooperation.

Angry accusations are not helpful.