In a media release earlier today from former BC Green Party leader Andrew Weaver, he announced he will leave the BC Green Caucus and sit in the legislature as an independent, effective Monday, January 20.

“Over the last few months I’ve spent a good deal of time thinking about how best to balance my commitments under the Confidence and Supply Agreement (CASA), my desire to see the BC Green Party grow its political presence in British Columbia and increasing health demands affecting my family”, Weaver said. 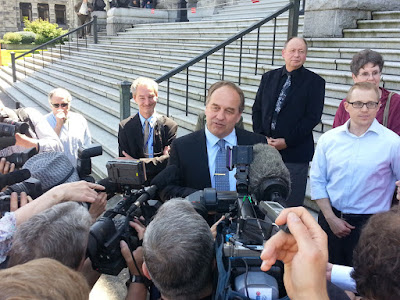 “After careful consideration I feel it is best for all parties if I continue my legislative work as an independent member, prior to the beginning of the spring legislative session.”

Weaver went on to say, “As the leadership race unfolds, I believe that it is important for the BC Green Party to develop a new vision and voice independent from mine. My presence in the BC Green caucus could hinder that independence”.

“Sitting as an independent will also give me a better opportunity during the upcoming legislative sitting to attend to personal matters, including a number of health challenges affecting my family”, the Oak Bay Gordon Head MLA continued

Upon hearing the news, the BC Greens Interim Party leader Adam Olsen commented in an email to members and supporters that, “The BC Green Party’s work these past years to begin to reduce partisan polarization from our political discourse and restore the public’s trust has been demanding, and we recognize that family must come first”.

The email went on to say, “Our priorities as a caucus remain the same: to represent the voice of BC Green values and priorities, to support a stable minority government and to hold the BC NDP government accountable. And we are ready for the opportunities and challenges ahead of us. Our leadership contest kicks off a new era for our party”.

While there has been no official word, as of yet, from the government of Premier, or Premier John Horgan, shortly after 11am the BC Liberals Andrew Wilkinson commented:

“On behalf of the entire BC Liberal Caucus I want to thank MLA Andrew Weaver for his public service as Leader of the Green Party of British Columbia and his work within that caucus”.

“I am joined by my colleagues in wishing MLA Weaver and his family all the best as he steps back to be more present with them at this time. Going forward, I look forward to continuing to work with the now independent MLA Weaver in the Legislature on the issues that matter most to British Columbians.”

Andrew Weaver was first elected as MLA for Oak Bay-Gordon Head on May 14, 2013 and was re-elected in the last provincial election (2017).

Prior to his election, he held the Canada Research Chair in climate modeling and analysis in the School of Earth and Ocean Sciences at the University of Victoria.