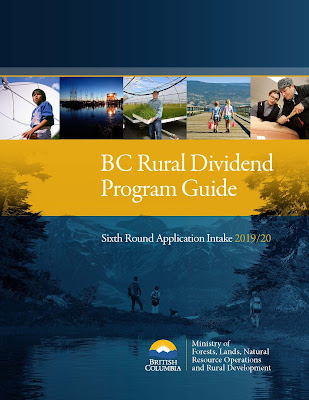 Yesterday was New Years day ... and the first installment of what I am calling “20 for 2020” ... ideas which I believe should be implemented by any political party who wishes to govern us.

As I mentioned on Tuesday, each of these suggestions and ideas, despite being number from one to twenty, will be random in order; and so they should not be interpreted as being presented in order of importance.

Yesterday, I paraphrased an idea which was presented by the BC Conservative Party back in May of last year. There will be four others from the Conservatives, however there will also be many ideas from my own experiences being involved in BC politics for over two decades, as well as suggestions from friends and political acquaintances.

Now, as today is January 2nd, here is suggestion number two ... there should be a review of services provided to areas and regions where much of the provinces revenues are collected from.

Many would likely say these areas are left to fend for themselves, while the majority of government spending goes to larger centres, far from rural and northern BC. The result of this is that many residents have to travel hundred of kilometres away from home, and this is more than just medical care and education. Living in rural BC should not be reason to treat local residents like second class citizens.

Second to today's thoughts; any political party hoping to replace the NDP, should also be willing to set up independent regional councils to decide where, how, and to what projects, monies in the Rural Dividend Program are allocated. Hopefully, in this way, residents will be able to feel more secure knowing that the monies in this fund go to projects which will have the best impact in their communities.


Government should also commit to ensuring that funding for the Rural Dividend Program is not hijacked for other programs, such as the BC NDP did recently, when they removed millions to instead be used for a forestry program. While the forest industry urgently needs a strong well crafted plan for recovery, robbing Peter to pay Paul was unjustified.

As I stated yesterday, I hope these thoughts and suggestions will have you thinking about ways in which we can have input into creating a better governing process.

Hopefully you’ll also have your own suggestions that can be put forward to those who wish to lead us.