With a number of rural, interior, and northern communities hanging on by a thread, bankruptcies are up in BC as businesses close up shop, and services are removed 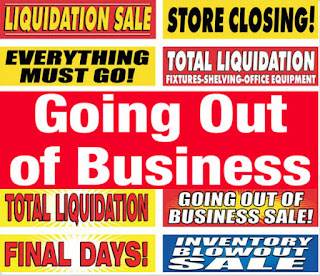 While they are November statistic, these latest numbers on bankruptcies in BC (BC InfoLine / BC Stats January 17th), continue to show the economic policies of Premier John Horgan’s NDP government continue to hurt British Columbians:

There were 339 bankruptcies filed by consumers in British Columbia in November 2019, a slight (+4.0%) increase from the same month of 2018. Meanwhile, the number of business bankruptcies was notably higher (+40.0% to seven).

Comparing that to national figures, the government of Canada shows the total amount of bankruptcies filed was down 3.8 percent, as both consumer numbers (-3.6 percent), and business (-8.0 percent) numbers, showed declines declined.

With forestry workers on Vancouver Island in month number seven of a strike against Western Forest Products ... many of BC’s suppliers and contractors to the forest industry either without work or seeing limited work ... and several thousand forestry workers now without jobs following the shutdown of several mills by Tolko, Canfor and others ... this news should come as no surprise.

Additionally, as disclosed at the Association for Mineral Exploration 2020 Roundup convention, held yesterday at the coyest, there has not been a new mine open in the province now in over two years ... and pipeline delays continue to plague the resource industry.

Many rural, interior, and northern communities, through-out the province, are hanging on by a thread, as businesses close up shop, and services are removed.

This government needs to be replaced, at the earliest opportunity, by one which realizes the people of BC cannot succeed without good paying jobs, and without seeing new business open, and existing ones expand.