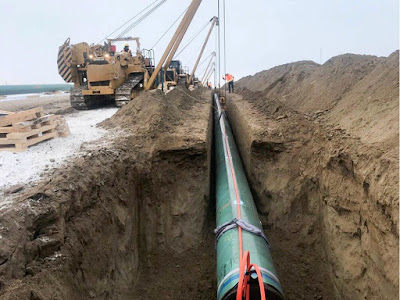 In a unanimous decision this morning, the Federal Court of Appeal dismissed four challenges, to the already approved Trans Mountain Pipeline, launched by a handful of First Nations in BC last Summer.  Following that decision, it did not take long for the government of Alberta to issue a statement:

“This is a victory for common sense and the rule of law. We are pleased the Federal Court of Appeal made a fair decision. This ruling confirms what we’ve known all along: the Trans Mountain expansion project has been held to the highest standard at every turn”, stated Alberta Premier Jason Kenney.

Continuing, he remarked, “While we respect the opinion of those who have voiced opposition to the project, the fact is the majority of First Nations communities – and the majority of Canadians – want to share in the economic benefits of responsible resource development. That’s demonstrated by the 58 mutual benefit agreements that Trans Mountain has signed with Indigenous communities across Alberta and British Columbia.

“Contrary to what the applicants assert, this was anything but a rubber-stamping exercise.  The end result was not a ratification of the earlier approval, but an approval with amended conditions flowing directly from renewed consultations”
~~ Federal Court of Appeal ~~

"We particularly appreciate the clarity in the decision that the duty to consult does not equal a veto. This marks an important milestone for TMX, but we won’t get ahead of ourselves. Completion of construction remains the one true measure of success. We will hold our celebrations until oil is flowing through the pipeline”.

“Our government will continue to stand up for Alberta by advocating for increased market access and protecting the value of our energy exports to grow our economy and create jobs”, Premier Kenney concluded.

While there has, as of yet, been no official media release from the BC government regarding the Appeal Courts decision, in a story in the Vancouver Sun, they stated that Premier John Horgan ... accepts the court ruling even though he is “not enamoured” with the prospect of a seven-fold increase in tanker traffic in the Strait of Juan de Fuca and Salish Sea.

This dovetails with Horgan’s early comments from mid-January Supreme Court decision where he stated, “Clearly, we are disappointed by the decision, but this does not reduce our concerns regarding the potential of a catastrophic oil spill on our coast."