Given the circumstances we find ourselves in, the next three words, which are highlighted in bold, seems fitting: 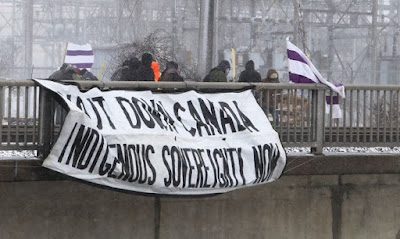 CHAOS ... a state of total or utter confusion with no order

INJUSTICE ... one definition I found describes this as unfair treatment; a situation in which the rights of a person or a group of people are ignored ... while another describes it as the absence of justice: violation of right or of the rights of another

Global News, and many other news outlets reported yesterday that ... Wet’suwet’en hereditary chiefs said Wednesday that a potential meeting with the Indigenous services minister this Thursday is not going to happen, despite an earlier signal that they would be open to the meeting.

Well of course they weren’t, and they never had any intentions to. From the beginning any time it looked like it might happen, these hereditary chiefs would add one more condition to the meeting taking place. Make no mistake about – these handful of individuals have no intention of finding resolutions to the anarchy they have unleashed on this country – it was always going to be their demands – or nothing. 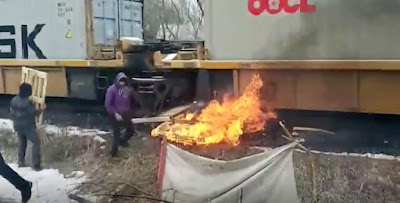 Now not only do we have ill-informed demonstrators and protesters disrupting the lives of peaceful Canadians just trying to get to work, to their families, to school and their children’s sports, and any number of regular every day activities of life ...  we also have foreign activists leading the fray and orchestrating havoc.

We have thugs, with covered faces to hide their identity, trying to intimidate and bully people ...

We have shit-disturbers lighting fires along the track where trains are trying to get necessities of life to Canadians – you know like propane and other heating fuels to our neighbours in the east ... foods to fill grocery shelves ... shoes for our feet ... and grain shipments, for example, to freighters choking every harbour on BC’s west coast.

Meantime today, according to the Prime Ministers Office, Justin Trudeau will be in Ottawa in “private meetings”.


I don’t know about you, by our Prime Ministers seems to project a sense of gloom, hopelessness and despair.

He is not leading our country ... he is not offering direction and purpose ... and he certainly is not doing anything about a situation which he himself has called "unacceptable and untenable."

Trudeau likes to utter words he thinks we want to hear – but those words mean nothing if the cannot – or will not – be backed by action.

The time to seek injunctions, for actions that are illegal in the first place, is over ...

The time for enforcement of the law, is long over due

Mr. Prime Minister, you have said that you entered politics to make change that would better serve all Canadians.

Do your job Mr. Prime Minister ... or resign!