On National Flag of Canada Day, all I see is our rich history and a promise of a bright future, created by the blood and sweat of those who came before us, being torn down and destroyed

“55 years ago today, the Canadian flag was flown for the first time in our communities across Canada, on Parliament Hill, and at diplomatic missions around the world. Today, on National Flag of Canada Day, we celebrate both the anniversary of the Maple Leaf and the story it tells of our wonderful country”.

Trudeau then continued, “In times of uncertainty, the flag reaffirms that the common values that unite us – openness, generosity, peace, and freedom – are stronger than our differences”.

In times of uncertainty, was certainly an excellent choice of words, as all around us we see signs of anarchism as protesters blockade people from going about their everyday lives, and the economy of Canada slowly grinds to a halt.

CBC News, in a story this morning remarked that, “... the PM might want to make the case that reconciliation isn't dead and Canada isn't falling into mob rule”.

... the most evocative image coming out of this week's protests against the Coastal GasLink pipeline was that of a Canadian flag hanging upside-down outside the provincial legislature in Victoria, with the words "Reconciliation is dead" scrawled across it.

The story continued, stating;
... between the declaration of reconciliation's demise and competing claims that Canada has fallen into "chaos" or "mob" rule, there is a yawning vacuum that Prime Minister Justin Trudeau might need to fill — to make the case again for a reconciliation project he embraced of his own volition ...

Meanwhile, back to our Prime Minister, Justin Trudeau.  While protests have been creating chaos for the majority of Canadians with the ‘common values’ of peace, justice, and lawful protest, he and his federal Liberal Party have ignored us.

Instead of acting like a leader we can be proud of, this past week he has been traveling the globe and consorting with tyrants and dictators, as he seeks support to gain a temporary seat on the Useless Nations (lack of) Security Council.

Trudeau is 100% accurate in saying that, “Over the decades, the Maple Leaf has been a symbol in Canadian art, medals, badges, and coats of arms. It has traveled to the highest peaks on Mount Everest, into space with the first Canadian astronaut, and around the world on the arms of Canadian Armed Forces members”.

Seeing our national flag being disrespected, scrawled on, and hanging upside down however isn’t the symbol Canadians, for the most part, have any wish to see. 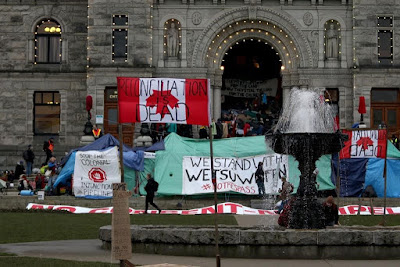 “Today, I invite Canadians from coast to coast to coast to reflect on our flag and what it means to each of us – a symbol of our rich history, and a promise of the bright future we are building together.”, Justin Trudeau concluded.

On National Flag of Canada Day, all I see is our rich history and a promise of a bright future -- created by the blood and sweat of those who came before us -- being torn down and destroyed ...

... and that, sadly, is something Justin Trudeau and his federal Liberal Party are, ‘building together’.