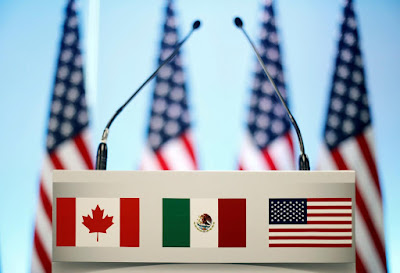 Canada will be the last of the three countries to ratify the North America Free Trade Agreement.

Mexico and the U.S. have approved the deal, with the President of the US signing Wednesday, after having passed the Congress a couple of weeks ago.

Canada has just introduced the Agreement to Parliament. We are not known for being ‘quick off the mark, are we?

On a number of occasions, I have highlighted Canada’s poor performance compared to other countries on ease of doing business. I have used the World Bank Study that showed for last year Canada coming in a dismal 23. In two areas in particular we did really bad; 124th for the time it takes to get an electrical permit, and 64th in the time it takes to get a construction permit.

Now comes another study from the CEO World Magazine (Best Countries to Invest in Or Do Business) that shows Canada coming 34th out of 67 countries studied.

Malaysia was in top spot followed by Poland and the Philippines. Here is how the study was conducted:

‘The rankings were based on 11 different factors including corruption, freedom (personal, trade, and monetary), workforce, investor protection, infrastructure, taxes, quality of life, red tape, and technological readiness. Each category was equally weighted.’

Here are some other countries that are ahead of us according to this study: Thailand, Uruguay, Chile, Bulgaria, Slovenia and Vietnam.

Of course, almost all the western European countries are ahead of Canada --- and not surprisingly the two other members of the North American Free Trade Agreement, Mexico and the USA, are also ahead of us.

In 1972, Brian Peckford was first elected, as a Progressive Conservative, to the Newfoundland Labrador House of Assembly -- he became Premier at the age of 36, holding the leadership of his party and government for ten years (1979 to 1989).

In 1993 he and his wife Carol moved across country to British Columbia, and now live in Parksville, on Vancouver Island.