PECKFORD – He is supposed to have violated the Elections Act for spending over $500 on elections advertising expenses. Now if that is not Russian style these days, I don’t know what is

Since when has to the two largest countries geographically changed places? Canada becomes Russia and vis versa.

That’s is a question that one is likely to ask as a result of a recent investigation in our Country. 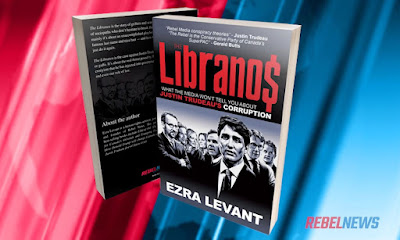 We have Trudeau’s Election Commission chasing after Ezra Levant because he wrote a book (‘The Libranos: What the Media Won’t Tell You About Justin Trudeau’s corruption’) and publicized it on billboards.

Oh, and during the election. Apparently, he did not register it ...?

He is supposed to have violated the Elections Act for spending over $500 on elections advertising expenses. Now if that is not Russian style these days, I don’t know what is! Those technicalities (still not proven in court) come in so handy.

Mr. Levant was forced on threat of penalty to come to the Commissioner’s office and explain himself before two investigators. But the investigators don’t tell him the reason for the investigation! Why? Because of ‘security reasons’.

As Rex Murphy said in his weekend article in the National Post entitled: ‘Our election chief investigates authors now?’.

‘What possible threat to Canadian Security on any imaginable level —to whom or to what—could there be in telling a person accused of something the substance of the actual investigation?’

Murphy does not mention that Mr. Levant’s news organization, Rebel News and another, True North were recently shut out of attending the recent leaders’ election debates by a Trudeau appointed Leaders Debate Committee  ... only to have a Federal Court at the last minute, (as a result of an appeal to it by Rebel News and True North) rule that the Leaders’ Committee was wrong and ordered that the two previously banned news organizations be allowed to attend.

What is going on in this country?

As Murphy mentions, one is reminded of the outrageous hounding (they raided his house) by the federal government of Vice Admiral Mark Norman only to back down when court proceedings would mean details embarrassing to the Government would be released.

Younger readers will not remember the hounding (by the Liberal Federal Government of Jean Chrétien) of the President of the Federal Development Bank, who refused loans to companies in Chretien’s riding. He was subsequently totally vindicated by a Quebec Court who found the federal government to have wrongly accused the President.

To those Canadians ‘all tied up in a knot’ over proceedings to our south, looks like we got lots at home to worry about.


In 1972, Brian Peckford was first elected, as a Progressive Conservative, to the Newfoundland Labrador House of Assembly -- he became Premier at the age of 36, holding the leadership of his party and government from 1979 to 1989.

Since leaving politics, early in 1989, Peckford has conducted public inquires for the governments of British Columbia and Canada, has served on numerous Boards including the CBC, and has been active in public affairs.  He also provides us with his thoughts and commentaries at Peckford 42.

Since 1993, he and his wife Carol have made British Columbia their home; they now live in Parksville, on Vancouver Island.